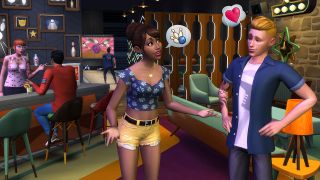 The Sims 5 may have just gotten its first solid details, and they point back to an unexpected spot in Sims history for future inspiration. During a recent conference call with investors, EA CEO Andrew Wilson was asked directly about the potential for launching an online-focused Sims title, as spotted by fansite Sims Community.

In the leadup to answering the question, Wilson pointed out that The Sims franchise is nearing its 20th anniversary. In that time the Sims has typically focused on fulfilling several of the needs that EA seeks to meet for players, but not as much on "social interaction and competition". That will likely change with the next entry to the series.

"As Maxis continues to think about The Sims for a new generation - across platforms in a cloud-enabled world - you should imagine that, while we will always stay true to our inspiration, escape, creation, and self-improvement motivations, that this notion of social interactions and competition - like the kind of things that were actually present in The Sims Online many, many years ago - that they will start to become part of the ongoing Sims experience in the years to come.

"We are very excited. This is a game that really doesn’t have any competition in its category for delivering and fulfilling these motivations for players and we think is a tremendous growth opportunity for us for many, many years to come."

That's a lot of High-Level CEO talk. Just to recap, Andrew Wilson strongly hinted that social interactions and competitions between players will be an important part of the Sims' future. You shouldn't necessarily expect it to be a full-on MMO like The Sims Online, but it's gonna be connected somehow. Maybe Destiny-style social zones and the chance to invite your friends' Sims over?

While we wait for more official word on The Sims 5, EA and Maxis are still working hard on The Sims 4. For instance, it just put out the Tiny Living Stuff Pack that was nearly the end of GR+'s own Alyssa Mercante.

See what else you could be playing soon with our look at the upcoming games of 2020.