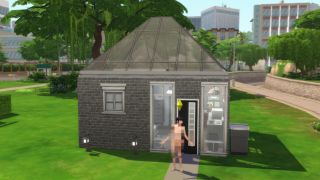 The Sims is celebrating its 20th anniversary this year, and it's been nearly that long since I last played the strategic life-simulation game.

I stopped playing the original Sims circa 2003, so naturally, I decided it would be a good idea to re-learn how to build within the draconian laws of a micro house. The new Sims 4 Tiny Living Stuff Pack has streamers like lilsimsie and Youtubers like Deligracy attempting a new challenge: build the smallest, cheapest house possible. With the new pack, it's easier to go small, thanks to space-saving storage and smaller furniture, so I decided to attempt the challenge. It's important to note that I did not use the "motherlode" cheat, but I also didn't keep track of the cost, as I considered half of the challenge to be difficult enough.

Not only was I trying to build a house from scratch for the first time ever in The Sims 4, but I was trying to build one within the stringent rules that would qualify it as eco-friendly, thus providing my Sims with cheaper bills, better in-house relationships, and the ability to brag to others about how they're just like Greta Thunberg. But there are myriad perils to both building and living in a comically small space, and I learned the hard way.

Overall, my first foray into the Sims in nearly 20 years consisted of about 12 hours of architectural puzzles, near-death experiences, and bathroom accidents that stressed me out to the point of developing an eye twitch. But it was hilarious.

I handcuffed myself from the start, choosing for nostalgia's sake to build a household consisting of me and my sister, Alana. It's hard enough to build a micro-house that accommodates one Sim, adding another made it laughably difficult. Still, I painstakingly recreated us in the game. "I'm glad you think I look like Kylie Jenner," my sister texted after seeing her Sim.

But a Kylie Jenner house this is not. The Tiny Living pack lets you choose from three different house sizes that offer varying benefits to its household members. I chose the smallest size – the micro house, which can only consist of 32 tiles. This is really small (a single bed is three tiles long and one tile wide, a full bed is twice as wide, but the same length), and if you're still trying to figure out how to place walls in order to constitute a room, it's impossible. I built the exterior walls and marveled at my handiwork, just to see a "you've placed 6 tiles of 32 for this tier" banner at the top of my screen.

After a solid half-hour of Googling "how to place floor," I had all 32 tiles filled, and began to work on allocating the space for each room. I figured the bathroom could be minuscule and it could come off the bedroom to save me from having to put another door off the "main" room. There'd be no real living room, but the game's new foldaway Murphy Bed and wall-mounted entertainment unit meant the bedroom could double as a hangout.

I furnished the entire place, following the placement rules and rearranging whenever the item turned red. By the time the build was "complete" in my naive eyes, I had a stove, a microwave, a fridge, some seating in the kitchen, a Murphy bed, and a shower and toilet in the en-suite bathroom.

It was time for the Mercante sisters to move in.

The (not so) smart house

A problem arose in minute one. Alana is a foodie, so I wanted her to scrounge me up a nice meal while I sat in the Lovely Dining Chair. Instead, she stood just inside the doorway, waving her arms about, a thought bubble containing a picture of the Lovely Dining Chair over her head. I moved the chair outside for a second, and Alana stepped closer to the oven but stopped before it. A thought bubble with footprints and a big red "X" appeared above her head. I went into build mode and double checked, but the oven had enough space in front of it.

At this point, I was wondering aloud what was going on, and GamesRadar+ Managing Editor, Sims fanatic, and my deskmate, Rachel Weber, asked, "is the lamp down too low?" My DonTripp Light Fixture, a Tiny Living Pack item, was indeed the culprit. Why would a piece of furniture meant to save space interfere with objects so easily? Make it make sense.

Once I sorted that out, I figured everything was gucci. Me and my sister went for a day trip into town, were mortally embarrassed by karaoke (on brand), and held our pee in to the point of discomfort (even more on brand). We headed home, ready to pull down the Murphy Bed and settle in.

Sleeping in the Murphy bed is like sleeping in the jaws of a crocodile (check out Motherboard's Gita Jackson describing the abject terror of it). At any moment, it can break and violently fold up while people are in it. But my first problem with the piece of furniture was that both of us couldn't get in it at all, as I had forgotten to leave enough space on the other side. Cue three more hours of me renovating the entire house: I'd shift an interior wall, move everything around, then use a Sim to test the furniture. By the time I was done I had swapped the location of the bathroom and deleted all the chairs and the kitchen table. But we could both sleep, damnit. And sleep we did. Sometimes.

The perpetual stress of tiny living

I decided to spend a few Sim days testing out the lifestyle of the micro house. Despite the purported benefits of tiny living, I was perpetually anxious. The house was small, but my stress was large. Here's what happened over the span of my gameplay:

Ultimately, I successfully completed (half of ) this challenge in a bizarre and stressful homage to my old days as a Sims player. Yes, I had to completely rebuild the house three times, rearrange interior walls a half a dozen times, delete a ton of furniture, and pee my (Sims) pants once. But I did it. Twenty years later, and I'm back at it. But this time, with The Sims 4, I'm thinking small and living large, anxiety included.

There's an easier way to do this, here's the best Sims 4 cheats.