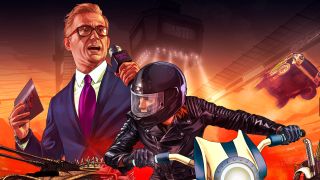 The latest GTA Online update is bringing you a wide variety of cars, new cash bonuses, and a bunch of new Twitch Prime rewards. Here's all that's included in the August 15 update.

Legendary Motorsport now has the Progen Emerus supercar in stock, described in the release as "a king among cars with all the qualities you would expect of a true leader: reliability, refinement, and the ability to go from zero to ridiculous like it's absolutely nothing." It certainly looks wild, with a massive spoiler, low-hanging front bumper, and bold red racing stripes.

But if supercars aren't your bag, try your hand at RC car racing in the new RC Time Trials. Now that the Diamond Casino and Resort is up and running, you can participate in RC Time Trials with permanently increased payouts (now GTA$100k instead of GTA$50k). During the week of August 15, you can pick up two times the GTA$ and RP when competing in the RC Time Trials.

Earn double GTA$ and RP from August 15 to August 21 in the Maze Bank Arena's War Series, where you can hop in vehicles and compete in demolition derbies, Flag Wars, and all sorts of other motor-based mayhem.

You can also spin the Lucky Wheel in the lobby for a chance to win an old school street racer - the Dinka Jester Classic, as well as your typical GTA$, RP, accessories, clothes, and much more. Plus, enjoy a ton of 30% off discounts on Arena War vehicles and the RC Bandito.

If you've linked your Twitch Prime and Rockstar Games Social Club accounts before August 12 you can get a Master Penthouse fo' free, which comes with VIP membership to the casino. Twitch Prime members with linked accounts can also enjoy some hefty discounts on the B-11 Strikeforce attack plane (75% off, what a steal) and the Imponte Ruiner 2000 muscle car (85% off to get your motor runnin').

As usual, the GTA Online updates are offering a bunch of great discounts, Twitch prime rewards, and some serious new whips.

For help navigating this murky world of crime and cars, check out our piece GTA Online: how to make money fast.