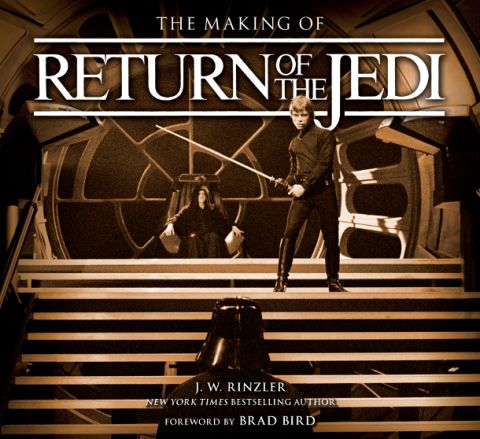 The Making Of The Return Of The Jedi book review.

Unlike the movie it documents, the last of the lavish original Star Wars trilogy “Making Of”s is every bit as good as its predecessors – even at 40 quid it's an essential purchase for any disciple of that galaxy far, far away.

The level of access is remarkable as, given the keys to the extensive Lucasfilm archives, author JW Rinzler assembles the definitive story of Return Of The Jedi . It’s a rich, lovingly assembled book with enough treats to keep you occupied through a stay in the Sarlacc's belly. Just flicking through it makes you feel warm inside.

Indeed, it’s so packed with rare behind-the-scenes photos and gorgeous concept art that it would be worth buying for the visuals alone – little things like Han Solo in glasses or designs for the ultimately unvisited world of Had Abbadon.

But it's in the words that the real treasure lies. While Rinzler's text occasionally errs on the dry side, the depth is astonishing – even the most obsessive Star Wars fan will learn something here. As well as conducting new interviews with key players, he's unearthed a previously unseen conversation with the film’s late director Richard Marquand. And through various script drafts and incredibly revealing transcripts of story meetings, you get to see the Jedi you know forming before your eyes. Whatever happened to the Emperor’s lava-filled volcano lair?