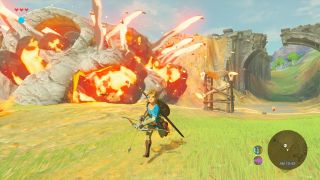 Nintendo made E3 2016 into a grand coming-out party for The Legend of Zelda: Breath of the Wild, but there are still many more secrets to find. NeoGAF user RagnarokX has started scratching the surface by decoding many of the Hylian alphabet messages that showed up in Nintendo's extensive gameplay demos.

My favorite is definitely the text that appears above the Sheikah Slate when Link goes to unlock a new rune:

According to RagnarokX, that is both a standard warning to not turn off your system while it's installing an update (the Sheikah Slate really is just a tablet) and a reference to ur-meme All Your Base Are Belong To Us. There's also the Shrine doors that are very upfront about what waits beyond them.

And the massive gear that very clearly spells out its purpose in life.

It's mostly goofy little messages like that, but there is one piece of text that could hint at how Link ended up in the Shrine of Resurrection.

It looks as if the text around his glowing blue bath repeats "Care Unit", as in Intensive Care Unit at a hospital. My guess is that Link's climactic battle with Ganon ended with the wrong one grievously wounded or dead (must have run out of fairies), and the only hope for the remaining forces of good was to seal Link's body away and let the Care Unit do its century-long magic. Then he wakes up in the Shrine of Resurrection and your adventure begins.

That's just a theory, of course. We'll find out more when The Legend of Zelda: Breath of the Wild is released on Wii U and NX next year.