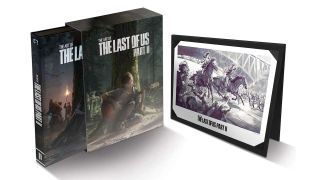 A fresh look at The Last of Us Part 2 has arrived via the newly announced Deluxe Edition of the game's art book, suggesting that horseback combat could make up a major part of Naughty Dog's incoming sequel.

While The Art of The Last of Us Part 2 was announced earlier last year, this Deluxe Edition has only just been revealed, with newly accompanied sneak peeks that show Ellie and (presumably) Dinah escaping a horde of infected on horseback.

While horse-riding has already been featured in Naughty Dog's trailers (and was indeed part of the original 2013 masterpiece), a closer look shows Ellie firing a bow and arrow from atop her steed, suggesting that we could be doing the same in-game when the title finally releases on May 29, later this year.

The Deluxe Edition's cover also represents a brand new image not seen before now, depicting Ellie hiding from the cult previously spotted in earlier trailers for The Last of Us Part 2, while the book's sleeve shows our heroine playing her guitar alone in the forest, with neither Joel or Dinah in sight.

Incidentally, art from a cancelled Last of Us animation surfaced last week, so perhaps PlayStation and Naughty Dog announced this Deluxe Edition to bury the news that we almost had an official Last of Us movie on our hands before Sony decided to shelve it. Every cloud, aye?