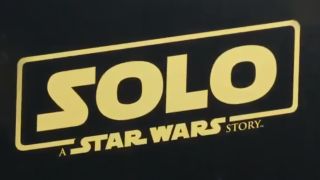 Well, we can finally stop calling it the Han Solo movie. It's officially Solo: A Star Wars Story. Director Ron Howard revealed the name for the young-scoundrel-centric standalone film in a final address from the set at the end of production. The tweet text doesn't say anything about a title reveal because he's cheeky like that.

Aside from clearly telling you who the focus of the movie is, the title evokes Jabba, Greedo, and other criminal scum who frequently refer to Han by his surname, teasing some of the underworld connections this film is set to explore. And the "A Star Wars Story" subtitle establishes it as another standalone tale like Rogue One: A Star Wars Story. I wonder if this means the Obi-Wan movie will be called Kenobi: A Star Wars Story...

I'm sure Howard's just happy to have successfully completed his directorial takeover, title aside. But many Star Wars fans on Twitter were quick to show their appreciation for the long-awaited reveal.

From now on all #StarWars titles should be revealed as though they were a secret message to Keira Knightley. #SoloAStarWarsStory pic.twitter.com/ZTvhU91B5wOctober 17, 2017

The only one real Star Wars that i’m expecting. #solo #StarWars pic.twitter.com/IaDtRNCErQOctober 17, 2017

Though others weren't quite so enamored with the choice of title.

It’s good we have those A Star Wars Story subtitling these movies. We don’t want Solo to be mixed up with Mario Van Peebles. pic.twitter.com/0F6Q2nfBEoOctober 17, 2017

Much better title for new solo movie “me and my Wookie” or “Solo: The Wookie Years” #starwarsOctober 17, 2017

If you think you could come up with a better title in your sleep, go ahead and share your suggestions in the comments. In the meantime, we'll be waiting for Solo: A Star Wars Story to premiere in May 2018.