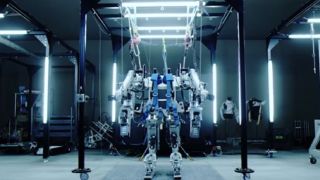 The year in tech kicked off with a bang at CES 2019. While past events have often yielded a slate of products focused squarely on gimmicky tech, this year produced some genuinely interesting stuff with real world applications. From TVs that roll in on themselves to massive 65’ IPS monitors from Nvidia, it was a promising showcase. And that’s all before the rumored reveal of the PS5 and Xbox Project Scarlett surface later in 2019. Here are some of the most exciting hardware trends we see looming on the horizon, and how they’ll find their way into gaming.

Standalone VR is already a reality, with the Google Daydream powered Mirage Solo and Oculus Go leading the charge into an untethered future, but standalone offerings have been pretty feature-light or niche thus far. That’s all set to change in 2019 with the release of the Oculus Quest (which was demoed at CES), a much more robust and capable standalone headset that will mirror the performance and library of the Rift.

Vive already offers a standalone headset for the Chinese market, the Vive Focus, and it is now starting to approach the wireless space globally with adapters for the Vive and Vive Pro. The problem with these devices is that they’re bulky and prohibitively expensive - the vanilla Vive adapter is $299.99 while the Pro option is a staggering $359.99, and you'll still need an impressive PC build to power them.

Hopefully Oculus’ heavy investment in standalone VR tech will give HTC the push it needs to begin development on its own wireless, completely untethered offering for the West. Perhaps even an iteration of the Focus that’s more powerful and streamlined, retaining the Focus’ excellent inside-out, six-degrees-of-freedom tracking. I’m also hopeful that new players in the space, like Google, will introduce a standalone option backed by their massive resource infrastructure, or even that Valve may eventually plumb the standalone depths, perhaps backed by a VR-exclusive version of Steam.

Ask anyone with an even reasonably elaborate entertainment setup – wires are the bane of the modern gamer’s existence. While we’ve made great strides towards eliminating technology’s poisonous braided snakes from peripherals like controllers, mice, and headsets, the final frontier is wireless charging.

Despite its origins in the 19th century, we’re still a ways off from any kind of broad implementation of inductive charging. The majority of solutions now require placing a device on a charging mat or stand, leaving it inert while it (slowly) charges. And of course, while there are some scant battery powered offerings, most of those charging mats still require wires, so while there are some advantages (like reducing the socket and cord wear of constantly plugging and unplugging your device) you’re still required to be tethered to a power source.

That said, the future of wireless charging looks bright. Disney has prototyped an entire room capable of charging wireless devices simply by having them inside of it, and a California company called Energous is developing a wireless charging solution that pairs a transmitter with a tiny (like, fraction-of-the-size-of a-dime tiny) receiver to charge devices at up to 15 feet away. As innovations like this continue to coalesce and be refined, it becomes easier and easier to imagine a future where everything from your DualShock controller to your electric car can be charged entirely sans wires. Could we see a wirelessly charged controller launching alongside the PS5 and the next set of Xboxs? It’s very possible.

One of my personal favorite reveals at CES this year was the Samsung GEMS-H (Gait Enhancing and Motivating System), a lightweight, sleek-looking exoskeleton designed to help propel your legs while you walk. Reports from the show floor indicate that it’s so light it’s easy to forget you’re even wearing it – that moving around with one strapped to your hips was like “walking on air.”

These kind of mobility assistance exoskeletons are just the tip of the iceberg. There are others late in development that will allow users to easily lift 200 lbs or more, and a company called Ekso Bionics already produces a lower body exoskeleton that allows paraplegic people to walk again. The same company recently partnered with Ford on a solution to allow factory workers to do overhead work with less effort and strain and a concomitant reduction in injuries.

What does this have to do with games? Match this kind of exoskeleton tech with the ‘Synesthesia Suit’ for Rez in VR and the possibilities are endless. Imagine true, one-to-one, full body motion tracking and sensory feedback, with portions of the suit vibrating or moving when you’re taking fire or hit with a melee attack. In extreme (and possibly undesirable, but still fascinating) scenarios, an exoskeleton could lock some of your limbs in place in a game if your avatar were tied up or hit with some freezing status ailment. And the AR possibilities are also rich; in the far flung future, we could bound around the world in exoskeletons playing AR games piped through a headset or glasses.

Pleased with that shiny new 4K TV you bought for Christmas? Doesn’t it look all fancy and thin, with all of its colors and lovely menus? Well, bad news, chum, as 8K is a reality and it’s going to make your beloved 4K TV look silly. True 8K resolution is 7680x4320 pixels, four times the density of current 4K displays, and that equates to a 33 megapixel image. 8K TVs were very much the hotness at CES, and you can actually buy the early models right now, if you have a spare $15,000 or so in your bank account. In fact, you’re going to need to buy 65” TVs or above to really see the difference between 4K and 8K. While there’s almost nothing that displays in 8K resolution at the moment, many broadcasters and creators are already planning 8K content for the coming years. It’s unlikely PS5 will offer 8K, and will likely stick to 4K at 60fps, but it’s still a possibility - even PS4 Pro and Xbox One X struggle to deliver consistent 4K right now. Netflix will undoubtedly be looking to create an 8K tier of original shows as the technology starts to becoming more available, and it’s likely that sports broadcasters will be going Ultra HD as soon as possible.

Although cloud-based streaming hasn’t exactly taken the world by storm, despite some promising initial offerings from Sony and Nvidia, 2019 could be the year that it does. Think about it. With theoretical data rates of up to 10Gb/s on the horizon, 5G will finally give us the option to forego our shady broadband ISPs in favor of slightly less dubious cellular providers. In an unexpected turn of events, for once in our lives, a win for capitalism is a win for us, the consumers.

With Sony insisting on broadband speeds of at least 5Mbps for its PlayStation Now streaming service, a simple trick of the calculator reveals 5G could offer up to 2,000 times that. GeForce Now, Nvidia’s PC streaming platform, requires an even more demanding broadband spec of 15Mbps. Meanwhile, its thirst left unquenched by domination elsewhere, even Apple is plotting a streaming service for games. The only remaining variables are Microsoft and Google. Both are suspected to have streaming efforts in the works, but neither the former’s Project xCloud nor the latter’s Project Stream are currently available to the public.

Assuming it’s a hit when it begins to roll out later this year, 5G might prove itself a ‘killer app’ for game streaming services across the board. Especially now esteemed networking hardware companies like D-Link are whipping up 5G routers, we’re a little more optimistic about the future of game streaming services than we were when Sony bought Gaikai nearly seven years ago. Now we’re not just looking forward to the aftermath of 5G on smartphones, but we’re also interested in learning about its effects in the console space.

Both Microsoft and Sony are rumored to have streaming-first consoles in the works. Thus, it’s only a matter of time before we find out for certain whether or not streaming is the future of games.

The promise of tomorrow

These and some of the other trends signaled at this year’s CES and across our industry point to a future of dramatic innovation. Look a little beyond the smart refrigerators and tech demos of vending machine robots and there’s a lot of real, promising tech shifting across the horizon. Sure, some of it is very much still in the prototype stage, but the trends we’ve highlighted above are already being rolled out in practical, real world scenarios, and many of them could alter the way we play significantly in the coming months and years.