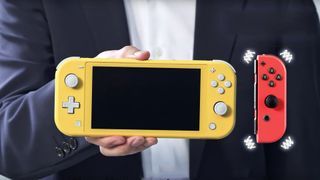 The newly revealed Nintendo Switch Lite looks great. It's a smaller, cheaper, slightly more efficient version of the Switch designed with handheld play in mind (something reflected by the low Nintendo Switch Lite price). It's basically a bid for the 3DS crowd, but even if, like me, you aren't interested in a handheld-only Switch, there's reason to be excited about the Switch Lite, as it's added one of the most-requested Switch features: a dang D-Pad.

I don't want to diss the Switch, but, well, here we go: the directional buttons on the Switch's left Joy-Con are no good and very bad. They're especially bad for 2D games like Hollow Knight or Shantae: Half-Genie Hero, or menu-heavy games like Monster Hunter Generations Ultimate, most JRPGs including Pokemon Let's Go, and by extension Pokemon Sword and Shield.

The directional buttons are the main reason I almost never play my Switch without my Pro Controller, and they're demonstrably inferior to a traditional clicky D-Pad in every conceivable way - so much so that players quickly took to modding a proper D-Pad onto their Joy-Cons shortly after the Switch launched. Anything annoying enough to compel players to break the warranty on their brand-new and otherwise stellar console or controller is a surefire problem, so I'm thrilled to see the Switch Lite get a D-Pad.

I suspect the D-Pad was added largely to mirror the 3DS' profile - again, 3DS fans being the Switch Lite's primary market - but I like to think it was partly because someone at Nintendo saw all those posts about players modding D-Pads onto their Joy-Cons. And I'm hoping that the Lite's D-Pad Joy-Con style will become available for other members of the Switch family in the near future. I'd love to see an alternate Joy-Con pack for the normal console, and for D-Pads to be standard on the long-rumored Switch Pro (for lack of a better label) which will reportedly beef up the system's innards.

I've reached out to Nintendo regarding the possibility of D-Pad-equipped Joy-Cons and will update this story if I hear back.

Update: In an interview with CNET, Nintendo of America president Doug Bowser confirmed that "there are no plans, or nothing to announce, in terms of further variations of Joy-Con," which has crushed my heart. I'm still holding out for Joy-Con D-Pads on the would-be Switch Pro, though.

Waiting on a good Switch deal? We're tracking all the best Amazon Prime Day game deals right here. Some online stores give us a small cut if you buy something through one of our links. Read our affiliate policy for more info.