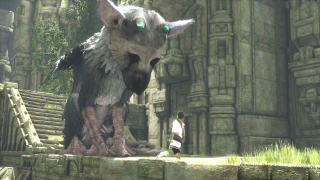 It's not the first thing you expect from The Last Guardian's gentle looking feathery dog... bird... creature but Trico has a power in game that lets him fire a deadly stream of lightning from its tail. Edge magazine was given an exclusive hands on demo with the PS4 game and goes in depth with it its cover feature out today.

Trico's ability is linked to a mirror picked up by the boy which is wielded like a shield. Point the shield in a direction and the creature will fire a devastating bolt of red electricity. Edge didn't use this against enemies in its demo but instead to solve environmental puzzles. Ueda has hinted that this will be an important power throughout the game.

“There are several reasons why I explored this idea, but one of them is to make players understand the force and ferocity of Trico,” The Last Guardian director Fumito Ueda tells Edge. “I believe things are more attractive when there’s a bit of oddness to them, rather than something being normal and appearing to be generally acceptable. The same thing can be said about Trico’s appearance."

Trico will constantly react to the world around it,  bristling and with feathers standing on end when its agitated. Even its eyes will change colour depending on its state of mind. If they're slightly pink, you'll know its wary or angry. Hopefully we'll see this in action at E3.

You can read the full preview in the new issue of Edge magazine out today. Download here or  subscribe to future issues.