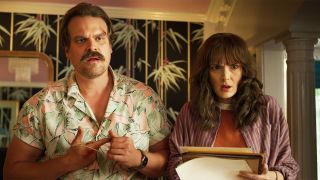 The binge is back

July 4? What’s that? Independence Day may as well have been cancelled for those looking forward to Stranger Things season 3. With only eight episodes this time around, plenty were getting stuck into a good ol’ binge.

Me to me: YOU SAID YOU WERE GOING TO SPREAD OUT THIS SEASON AND SAVOR IT AND YOU WENT AND BINGED IT ALL IN ONE SITTING NOW WHAT. #StrangersThings3 #StrangerThings pic.twitter.com/WzoPOEN0YUJuly 5, 2019

Celebrating America on the 4th of July?! pshh it’s more like celebrating the return of @Stranger_ThingsJuly 4, 2019

waited like two years for stranger things to come out only to finish it in less than one day and now I have to wait another two years pic.twitter.com/IBlBCPwO0EJuly 5, 2019

Netflix released stranger things s3 on july 4 bc they knew we were gonna binge watch it and finish it on the 4th of july lmaoJuly 5, 2019

Stranger Things season 3, more than ever before, has gone heavy on the ‘80s references. Terrible haircuts, synth music, and even more terrible haircuts. I’m pretty sure there’s rainbow leggings in every other scene, too. Young and old alike were all spellbound by the dazzling festival of colour and crop tops.

The 3rd season of Stranger Things plays right into the times. The evil side is the Russians, who are portrayed as simplistic, stupid, humorless and downright malicious. It’s fitting that Stranger Things takes place in the 1980s since it recycles the worst tropes of the Cold War.July 5, 2019

I was exactly the same age as the kids in @Stranger_Things during the years in the story. I'd have been in their D&D group.Not only is the show so well-written and well-cast and well-acted, but most of all, it is a love letter to the 1980s and I just love everything about it. pic.twitter.com/zyK3IkM0agJuly 4, 2019

Ugh the aesthetic of Stranger Things this season brings joy to my outrun/synthwave loving heart and makes me miss the 1980s big time.July 5, 2019

Stranger Things 3 was great an action packed return to Hawkins Indiana that pays tribute to 1980s summer blockbusters while maintaining that charm that makes the show special. At it’s core it is a beautiful story about growing up it was wonderful 💙 pic.twitter.com/h1teQ3PZsWJuly 4, 2019

This is 1980s nostalgia done right, perfectly capturing all of the action, humour and most importantly heart of the classics form the era that it emulates. It honestly felt so good to spend more time in Hawkins, Indiana, and I can’t wait for the next season. #StrangerThings pic.twitter.com/i5n17Ck6ktJuly 5, 2019

The new faces in town are impressing

The new mayor is one of the best cartoonishly evil villains around, but it’s Scoops Ahoy’s Robin that steals the show. Hawkins, Indiana, just found its next kick-ass mall worker. And, no, it’s not Steve.

Eleven and Mike sitting in a tree...

The Stranger Things season 3 trailer has hinted that the fledgling romance between Eleven and Mike would drive a wedge between the gang. It certainly does – but many are cringing (and cheering) alongside some trademark childhood lovey-dovey moments.

same energy as that time when el said “i dump your ass” to mike#StrangerThings3 #StrangerThings pic.twitter.com/eoStaEaC9SJuly 5, 2019

Stranger Things isn’t just a time capsule back to the time that style forgot. There’s the small matter of the Upside Down and all the creepy nasties that come with it. Pro tip: don’t watch certain scenes alone.

Does anyone else find stranger things scary? Like I don’t want to walk upstairs into my room because the light is off and I’m worried there might be a demagorgon in there 👀🤷‍♀️July 4, 2019

HOW MANY RATS DOES STRANGER THINGS HAVE THIS SEASON I CAN'T KEEP WATCHING THESE CREATURES EXPLODE AND DO THOSE SCARY GROSS THINGS SHHFJDJuly 4, 2019

The verdict is in: Stranger Things season 3 is a hit. Not only that, but fans are already looking ahead to a potential fourth season, such was the quality of this year’s eight episode run. Same time next year? Pretty please?

stranger things is easily one of the best shows ever created. season 3 was so amazing.July 5, 2019

Stranger Things 3 is a HUUGE improvement over the clusterfuck that is Season 2. Nearly takes me back to Season 1 levels of fun, of course it could be if the villain weren't so comically laughable. Besides that, an amazing season with better writing and characters!July 5, 2019

just finished stranger things 3. I’m not going to lie I thought I’d hate this season after the last (was not a fan). wow I was wrong this whole season had me riding an emotional roller coaster, and just the character development was amazing. #strangerthingsseason3 #strangerthingsJuly 5, 2019

Want more Stranger Things in your life? Be sure to read sister site SFX's big interview with Millie Bobby Brown.