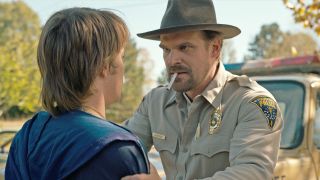 It’s perfectly reasonable to want to skip a whole year, isn’t it? No offence 2018, it’s nothing personal, but 2019 is home to Star Wars 9, Game of Thrones season 8, Avengers 4 - and now it’s looking likely that Stranger Things season 3 will join that already heaving list.

Who’s responsible for this piece of bad news? It’s Hopper – I mean, of course it’s Hopper. Bad news follows him around like nobody’s business.

Speaking to Variety, actor David Harbour says that, despite the show’s clipped length compared to other TV shows, it takes a long time to craft a season of Stranger Things. “I mean, one of the things that’s annoying for fans is that it takes us a long time to do them. Like, you probably won’t get [season 3] until sometime in 2019,” Harbour reveals.

That’s not to say the Duffer Brothers are resting on their laurels and counting that sweet, sweet Upside Down cash. Far from it. In fact, they’re reaching almost obsessive levels of work according to Harbour: “But also part of the thing is, like any good thing, they need time. And those guys work so hard. I mean, they just sit in their apartment and write for 12, 14 hours a day.”

It’ll be kinda hard to go possibly two years without checking in on the Stranger Things kids in Hawkins, Indiana, but, y’know, these things happen. I’d rather a meticulously planned-out third season with Eleven and the gang than a rushed effort to cash in on the show’s popularity. Absence makes the heart grow fonder and all that.