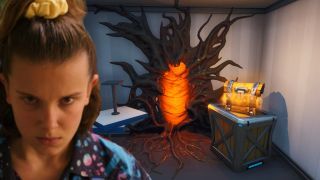 At this point Fortnite is more than just a battle royale behemoth, it's also a swirling vortex of pop culture references, and Stranger Things is the latest TV show to get caught up in it. To mark the launch of Stranger Things season 3 on July 4, strange portals have started appearing around the Mega Mall. Sadly, they don't take you to the Upside Down.

At the moment there are six portals, and they just transport you to somewhere else in the Mega Mall. Will that change when Stranger Things season 3 goes live on Netflix? Somewhere out there some Netflix lawyers and Epic developers know, and they're not telling.

The appearance isn't a huge surprise, during E3 2019 Netflix's director of interactive games Chris Lee spoke about the crossover, pointing out that the Scoops Ahoy ice-cream shop from the show had appeared in the mall, and suggesting more was to come.

The crossover is just the latest and won't be the last, with past collaborations with the likes of Avengers: Endgame, John Wick 3, and, uh, Nike's Air Jordans proving that you can make anything work in Fortnite. I'm just gutted they didn't leap on the chance to get something Midsommar related in this week.

You can stay tuned for more Stranger Things Fortnite crossover news as it happens, as well as all the teases and information about Fortnite season 10.

Ready to rustle up a deal that would make a Demogorgon smile? We're tracking all the best Amazon Prime Day game deals right here.