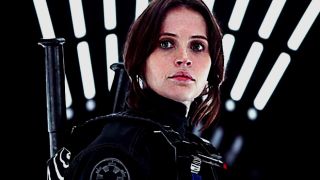 Reports of Star Wars: Rogue One's reshoots appear to have been somewhat exaggerated. While it's true the film will be getting said reshoots, the impetus was apparently never poor test screenings. According to Deadline, the only people to have seen the film are Disney's top executives, and the reshoots are not particularly extensive.

Reporters for other entertainment magazines have likewise stated on Twitter that there's no reason to be particularly alarmed. Justin Kroll of Variety says that "most of the shoot will involve the cameo of a very important character," while Borys Kit of The Hollywood Reporter writes, "The new stuff [is] to inject fun, 'classic' Star Wars feel."

The current word-of-mouth is that the "very important character" mentioned by Kroll is none other than Han Solo. This would make a certain kind of logical sense, as Alden Ehrenreich was cast as the young version of Solo after the film was well underway. Given Rogue One's timeline however, I'm not so sure I buy that we'll see Ehrenreich in the role.

Disney has utilized Lola VFX - a Hollywood special effects company - to de-age heroes in films like Ant-Man and Captain America: Civil War, so if the rumors are true and Solo will make an appearance, I personally would wager it would be CGI-enhanced Harrison Ford that we see.

Or, as we suspected back when the Rogue One reshoots were first reported, it could be that the filmmakers are looking to give more screen time to Darth Vader. Or it could be time for Jar-Jar Binks to reappear! Who knows? In any case, try not to fret too much. The Force is strong with this one.