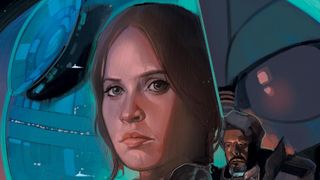 You've probably seen Rogue One: A Star Wars Story in theaters, but this spring you'll also get a chance to read it in comic book form. And fans will probably want to do just that, as writer Jody Hauser tells Entertainment Weekly that the comic will include scenes and character moments which were cut from the film.

"The comics will definitely expand on what was seen in both Rogue One the film and the novelization," Hauser claims. "Lucasfilm and Gareth Edwards had a bunch of ideas for extra scenes and character moments that didn’t make it into the film. I’m having a lot of fun playing around with those. Adaptations across different forms of media have always been a great opportunity to explore other facets of the story, and we’re excited to have new material in the Rogue One comic."

In other words, it sounds like the Rogue One comic will more or less be the Rogue One: Extended Cut we'll probably never get on DVD or Blu-ray. Fans seemed particularly curious about Jyn's formative years with Saw Gerrera, so hopefully that (and maybe a few of those shots from the trailers that didn't make it to the big screen) will be present and accounted for in the comic.

The six-part comic series will be published under Marvel beginning this April.