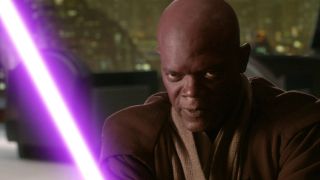 Up until Samuel L. Jackson's Mace Windu arrived on the Star Wars scene, things were pretty simple – at least when it came to lightsabers. You had either a blue or green blade if you were a good guy, or a red one if you're evil. Easy. The Jedi High Council member, though, got his own, unique purple lightsaber. We now know why, thanks to a behind-the-scenes clip from the set of Star Wars: The Phantom Menace.

The reason? Samuel L. Jackson simply pulled George Lucas to one side on set to see if he could get a purple lightsaber. After all, who can say no to Sam Jackson?

The exact moment Samuel L. Jackson asked George Lucas for a purple lightsaber is on camera and I’ve never seen it?? I’m overwhelmed from r/PrequelMemes

The footage, which has resurfaced thanks to Redditor u/EKRB7, shows Jackson hilariously asking George Lucas the creator of Star Wars, “Who do you have to talk to about your lightsaber colour?”

Lucas, at first, deflects the request and breaks down what is allowed in Star Wars lore: “Well, good guys are green and blue, bad guys are red. That’s just the way it works.”

Jackson, though, was clearly determined: “No purple [lightsaber]?” Lucas’ response, seemingly having been worn down by the Jedi mind trick of asking over and over again until you get what you want, seals the deal, “You might get purple.”

The video ends perfectly. Sam Jackson has a massive grin on his face, safe in the knowledge that he’s about to stand out on screen for the rest of the prequel trilogy – after all, it's difficult not to know exactly where Mace Windu is during that climactic Attack of the Clones battle when his blade is a different colour to everyone elses. The rest is history and, coupled with a heavy helping of merchandise sales, probably not the worst decision Lucas ever made on a whim.