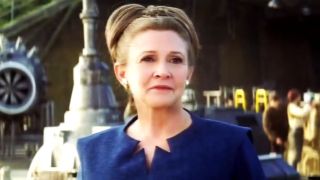 The late Carrie Fisher will return in Star Wars Episode 9, and director JJ Abrams has explained how the movie will bring Leia Organa's actress back for the final part of the new trilogy. A post on StarWars.com quotes Abrams, who says that the film will repurpose unused footage from Star Wars: The Force Awakens for the purposes of continuing Leia's role in the story, and possibly giving her a more intentional sendoff.

"We desperately loved Carrie Fisher," Abrams said. "Finding a truly satisfying conclusion to the Skywalker saga without her eluded us. We were never going to recast, or use a CG character. With the support and blessing from her daughter, Billie [Lourd], we have found a way to honor Carrie's legacy and role as Leia in Episode 9 by using unseen footage we shot together in Episode 7."

Fisher died in December 2016, a year before Star Wars: The Last Jedi came to theaters but after her filming had already been completed. Since then, there's been no end of uncertainty about whether or how Star Wars 9 would feature Leia, the character she's embodied since the original Star Wars in 1977; fans wondered if Lucasfilm would use a CGI stand-in as they'd done for the late Peter Cushing in Star Wars: Rogue One. Then company president Kathleen Kennedy seemed to decisively strike down those rumors in April 2017: "Sadly, Carrie will not be in nine," she said. "But we will see a lot of Carrie in eight."

Granted, Kennedy said that before Lucasfilm confirmed it was bringing Abrams back on to direct Star Wars 9. And though the nature of reusing old footage shot for other purposes likely means Fisher's time in Star Wars 9 will be brief, it does mean she'll get to play a role without the need for an uncanny digitized double.

The same announcement also confirmed that Mark Hamill will return in Star Wars 9 which (spoiler warning for The Last Jedi) likely confirms he'll join Yoda as a serene yet potent Force spirit. Maybe we'll even see return appearances of Obi-Wan Kenobi and Anakin Skywalker? In which case I dare you not to get teary eyed, seeing them all together once more.

For more thoughts on where things could be headed, check out these big Star Wars Episode 9 theories.