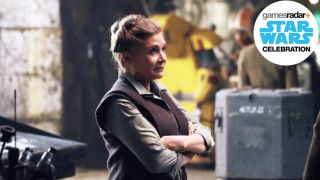 There’s a disturbance in the Force: it turns out Carrie Fisher will not be appearing as General Leia Organa in Star Wars 9.

Kathleen Kennedy, the President of Lucasfilm, gave an interview to ABC News during Star Wars Celebration Orlando 2017 and laid out the sad truth for fans everywhere. “Sadly, Carrie will not be in nine,” she said. “But we will see a lot of Carrie in eight.”

So Leia has a large role in Rian Johnson’s Star Wars: The Last Jedi (you can see her in the trailer), but now we know for sure that film will be the last time we see the late actress in her iconic role. A few days ago, it was reported that Fisher’s family had given Lucasfilm permission to utilize unused footage of Leia for future films, considering Fisher’s untimely death late last year. But Kennedy says her family members were “confused” when they mentioned Fisher would be appearing in Episode 9.

This raises a big question: just because The Last Jedi will be the last time we see Carrie Fisher, does that also mean it's the last time we'll see Leia? Will director Colin Trevorrow (who has yet to start filming Episode 9) use the same technique we saw in Rogue One to capture an older digital version of the character to finish off the new trilogy? It wouldn’t be an unprecedented move - look no further than Furious 7 to see how filmmakers have used digital technology to still give an actor a touching send-off. But perhaps it’s still early enough in pre-production that they’ll be able to avoid using those effects altogether and find a cleaner way to satisfactorily write her out of the story.

Watch Disney and Lucasfilm’s wonderful tribute to Fisher from Star Wars Celebration, and take a look at the actress in a new costume on the set of The Last Jedi right here.