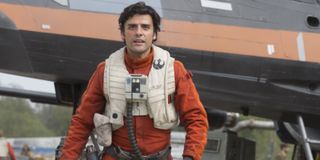 While there's understandably very little information on Star Wars: Episode 8 at present, everyone involved is saying that the sequel will be much darker than The Force Awakens. That sentiment is echoed by Oscar Isaac, who told Rolling Stone that his Poe Dameron and the other newly established heroes will be put through the wringer next year:

"What happens now is the heroes get tested. All three of them. That means Poe Dameron, Rey, and Finn all have considerable adventures ahead of them in this film. [They] get tested immensely. BB-8's doing all right. BB-8 gets tested too! Everybody gets tested! It's the dark second chapter, but not really dark".

Isaac also told Rolling Stone that he is constantly trying to "complicate and deepen" his character, whilst revealing that he came up with some of Episode 7's best lines - the "who talks first" exchange is all Isaac. While the story may be getting darker, there's a good chance Episode 8 won't be the last time we'll see Poe on the big screen; "It's the first time in my life when things have been mapped out for quite some time", Isaac revealed. "I'm basically Star Warring until 2020".

I'm intrigued to see how Poe's story continues in Episode 8; as played by Isaac he is a charming character, but he didn't really have much of an arc in The Force Awakens. Hopefully that won't be the case when the best resistance pilot in the galaxy returns to cinema screens next year.