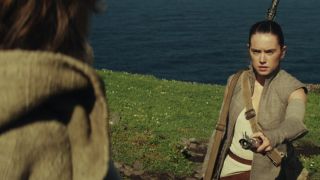 A week after the cast and crew of Star Wars 8 held a swanky, Stormtrooper-filled wrap party, the movie has now officially wrapped. The occasion was marked by Lucasfilm on social media via a looped clip of the final slate being clapped:

“Final slate of the final shot," reads director Rian Johnson's caption. "VIII is officially wrapped. Thanks to the best cast and crew in the galaxy, and thanks to the fans for all the love and support though the whole process. Cannot wait to put it together and share it with you all! "

Principal photography draws to a close roughly five months after it kicked off, and we already knew today was the day thanks to Mark Hamill. With the movie now in the can, that leaves Johnson and his crew of technical wizards well over a year to prepare the movie for cinemas.

That also means there's oodles of time for us to learn more about the film. Like it's name, for instance. Or you know, what it's actually about. The powers that be probably have a marketing plan in place for all of these reveals, and we're just going to have to wait it out. But if you're desperate for ANY new scraps of intel, take a look at Johnson's required viewing for his cast and crew. Could be there's some pretty big hints in there.

Check out our Star Wars 8 page for more comprehensive info about trailers, release date, cast, plot, theories and much, much more.