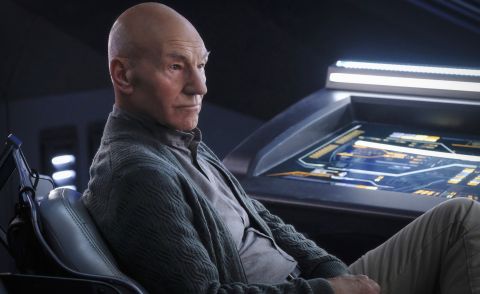 If the first three episodes were essentially prologue, this is where Star Trek: Picard becomes a show in its own right.

Jean-Luc Picard hasn’t been himself lately. The face is familiar, yet the man we’ve been reunited with in Star Trek: Picard is a stranger. Picard's glory days are far behind him – so far that he’d essentially resigned himself to living the rest of his days uneventfully on the family vineyard.

But, as if the episode’s title, “The End is the Beginning”, wasn’t a big enough clue, this third instalment signals the reawakening of the Jean-Luc Picard we used to know. By the time the credits roll, he’s found a ship, assembled the beginnings of a crew, and is ready to make it so all over again. If the first three episodes were essentially prologue, putting in the hard yards to establish what’s happened since The Next Generation, this is where Star Trek: Picard becomes a show in its own right. The first act is over, so now it’s time to get busy exploring strange new worlds.

“I tried my best to belong to this place,” Picard tells his Romulan friend/protector Laris as they stare at the night sky from the veranda of his chateau, “but I don’t think I ever truly felt at home here.” That’s hardly an Earth-shattering revelation – as far back as TNG episode “Family” we’ve known that Jean-Luc was far more fussed about Vulcans than vineyards – but it highlights Picard’s growing realisation that his post-retirement Earthbound existence has meant living a lie, that his true home has always been among the stars.

Watching that feeling evolve through the episode is one of the highlights of the season so far. The meek old man who had to hide from Dahj’s attackers in San Francisco is now the one shooting the phaser when obsessively secretive Romulan cabal the Zhat Vash make an unexpected house call. And as Picard sets foot on a starship for the first time in years, there’s a beautifully played moment of hesitation when he walks past the captain’s chair. It doesn’t last long – soon after Picard is raising his hand in a gesture familiar from the TNG days, delivering an authoritative “Engage!”

But there’s a subtlety to this episode that was lacking in its predecessor, “Maps and Legends”. Rather than bombarding you with information, episode 3 follows that old storytelling maxim that it’s better to show than tell. Yes, there’s still plenty to absorb, but this instalment uses character interactions to deliver its revelations. The pleasing consequence is that it feels more like a story than a cribsheet.

It doesn’t hurt that the new characters joining Star Trek: Picard’s ranks are instantly memorable. We briefly met former Starfleet intelligence officer Raffi last week, but now we’ve learned her history with “J.L.” (imagine the reaction if the old Enterprise crew had tried calling him that) we start to understand why she’s far from his biggest fan.

Just as Picard felt betrayed by Starfleet abandoning the Romulans, Raffi believes he turned his back on her when he resigned. She’s subsequently had to face more than her fair share of demons, from chemical dependency – surely Raffi’s the first character ever seen vaping in Trek? – to knowing that there’s concrete evidence a high-ranking Starfleet officer was involved in the synthetics’ attack on Mars. Their aim? Damaging the fleet to the extent that abandoning Romulus becomes politically expedient. (This is a neat echo of the conspiracy in Star Trek 6: The Undiscovered Country, where senior officers plotted to jeopardise peace negotiations with the Klingons.)

Chris Rios, owner of Picard’s new ship, is similarly broken, a former Starfleet officer who lost his captain in horrific circumstances, and whose former ship has been expunged from history – it seems cover-ups are a speciality of the new-look Starfleet. Intriguingly, his ship is co-crewed by a homage to Star Trek: Voyager in the form of an Emergency Medical Hologram (E.M.H.) and an Emergency Navigational Hologram. They look a lot like Rios himself, but with different personalities and accents, they will at least give actor Santiago Cabrera to show off his range – especially if there are more holograms waiting to be revealed later.

Data may be dead, but he could be Star Trek: Picard's most important character

Meanwhile, on the Borg Cube, we’re treated to a first encounter with Hugh, the former Borg who learned individuality on Picard’s Enterprise – and subsequently transformed the Collective. He’s now Executive Director of the Reclamation site and clearly intrigued by Dahj’s sister Soji – partly for her empathy towards former Borg, partly because she knows so many Romulan secrets.

Their meeting with “the Disordered”, reportedly the only Romulans ever assimilated by the Borg, reveals hints of the sort of prophecy storyline that Trek’s rarely dabbled in outside of Deep Space Nine – and suggests that every planet in the universe has its own version of tarot cards. Ramdha, one of the Disordered, claims she remembers Soji “from tomorrow” and asks whether she’s “the one who lives or the one who dies.” We obviously know the answer to that one, but Ramdha believes Soji is the Destroyer – an opinion shared by the captured Zhat Vash interrogated by Laris in Picard’s chateau. The question is, is this just paranoia seeded by the Romulans' deep-seated mistrust of androids, or is there something genuinely dangerous about Soji? The twins' ‘father’, Data, had an evil twin in the form of Lore (as discussed here) – perhaps that good/bad sibling axis has continued into the new generation.

It’s just one of many mysteries this episode leaves behind. How does Soji know so much about the obsessively secretive Romulans and their history with the Borg Cube? Who is Dahj/Soji’s adoptive mother, and does she have a greater role to play in the plot? Why are Romulans so fearful of synths that the Zhat Vash are hellbent on finding the twins? Now that she’s used a phaser, has Dr Jurati discovered a taste for doing more than simply revealing key plot points? Have we seen the last of the brilliant Laris and Zhaban now Picard has beamed into space and left them to tend his vineyard? And what the hell is Freecloud? It sounds like an early social media network to us, but the dice that roll across Raffi’s screen suggest it’s more likely to be a futuristic gambling destination. If that’s the case, why would AWOL cyberneticist Bruce Maddox be hanging out there? Hopefully, the answers won’t be too long coming.

New episodes of Star Trek: Picard appear in the US on Thursdays on CBS All Action, and in the UK on Fridays on Amazon Prime Video.

Star Trek: Picard episode 3 review: "The old Picard is back"

If the first three episodes were essentially prologue, this is where Star Trek: Picard becomes a show in its own right.