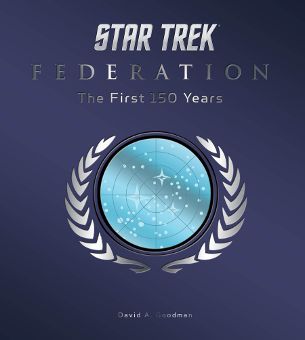 From the future to your coffee table, Federation: The First 150 Years is an in-universe recap of the Trek universe’s origins, covering everything from Zephram Cochrane’s pioneering warp drive test flight through to the death of James T Kirk.

Originally available in the States with a pedestal featuring electronic lights and sounds (for an eyewatering RRP of £75), it’s a well presented book, especially in its use of illustrations over cast photos, and one that plays things completely straight. When talking about Cochrane for instance, it’s the official version that takes point — no Enterprise crew, no Borg. Later, the Temporal Cold War is mentioned, but only in passing, and with extreme skepticism over Archer’s claims.

The result is very believable as a book the Federation Council could put its stamp on, and one that wins bonus points for focusing on filling the series’ historical gaps rather than just rehashing original series/Enterprise episodes.

The catch is that in being so official, the tone is bone-dry, with the timeframe meaning that civilisation-defining moments like the Xindi attack on Earth barely warrant a couple of pages. There are smaller-scale moments of levity, like a tale of Cochrane having to fix Archer’s fridge, and a Klingon’s post-Tribble hunt report. They’re few and far between though, and while the academic tone works to give the book both its artifact-from-the-future vibe and keep things respectful, it’s hard not to wonder how, say, a Bill Bryson of the future might handle the same material.