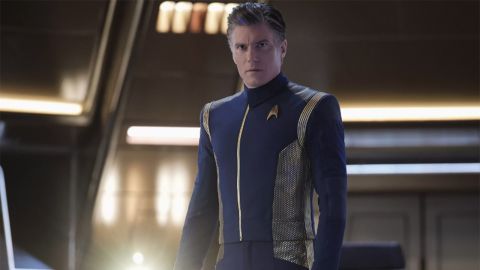 After the excitement of the premiere, Star Trek Discovery season 2 calms things down a bit with a classic away mission story, which will both delight and satisfy Trekkies everywhere.

New Eden kicks off with Burnham (Sonequa Martin-Green) sharing her discovery about Spock with Pike (Anson Mount), revealing that he saw the red signals months before they appeared to Starfleet. When she urges him to find Spock, Pike reveals that he’s known where he is this whole time - in a psychiatric unit on Starbase 5. Burnham isn’t given much time to dwell on the news before the Discovery has found another red signal deep in the far reaches of the Beta quadrant, AKA much too a far away for the Federation to reach it anytime soon. Enter, the D.A.S.H. drive and Stamets (Anthony Rapp)! Once the Discovery reaches the coordinates, they again find the red signal has disappeared, but this time, in its place is a planet… with human occupants. How is this possible? Pike intends to find out as he takes Burnham and Lt. Owosekun (Oyin Oladejo) down to the surface to investigate.

They come in peace

New Eden is a classic Star Trek away mission episode and it’s immensely enjoyable to see that Discovery is just as good at interrupting its Trek roots, as it is at introducing new ideas and concepts to the franchise. After the explosive, but busy opening episode, this is just what we need to re-centre the season 2 story before continuing on the path to hopefully more action and adventure. The mystery surrounding how a human settlement came to be on a planet in the Beta quadrant gives the show the opportunity to talk about the hallowed Prime Directive (AKA General Order 1) and everything that goes with it. This leads to some hardcore Trek conversations between Burnham and Pike about morality and religion, and we’re gifted with another little piece of the Pike puzzle. The straight-forward storyline also allows for some much-needed character development of the secondary Disco crew (basically, all the recurring characters on the bridge who aren’t main characters), who have been woefully underused up until this point.

The fact that, at first, it seems odd that Burnham suggests Owosekun for the away mission speaks to the lack of character develop of the rest if the Disco crew, but if you can get past that, one of the best things about New Eden is getting to know the Discovery helmsman a bit better. Oladejo rises to the challenge of stepping into the spotlight more (if only for one episode - we’ll have to wait and see) and, thankfully, her character is actually given plenty to do, say, and is even quite often the driving force behind the episode’s plot progression. Not merely brought along as a third body to balance out the away team, we learn a little more about Owosekun’s past and watch as she solves problems and, effectively, kicks ass as a capable member of the team. Hopefully, this is just the start of season 2’s ongoing mission to flesh out the other bridge officers (I need to know Lt. Commander Airiam’s (Hannah Cheesman) backstory, ok?).

The episode’s new cast members, who will presumably only appear in this one episode, also turn in effective performances as the human settlers who live simple lives, but are anything but ignorant. Andrew Moodie, in particular, offers an excellent example of how a character and a performance can shine even with only limited screen screen time. Then there’s a new character who will almost definitely stick around in the form of Tilly’s (Mary Wiseman) friend May Ahearn (Bahia Watson). To say too much about her character would spoil one of the highlights of the episode, but suffice to say she’s an intriguing addition to the cast. Watson herself is magnetic and draws you in completely with her unflinching charism, and it’s fun to watch Tilly interact with someone a bit more like her rather than constantly being the odd one out amongst the stoic Discovery crew.

It’s obvious that Star Trek Discovery season 2 is setting up just as many mysteries, questions, and twists as its first season, but none of that detracts from what is, quite simply, a perfectly balanced Star Trek away mission episode. While there’s still plenty of references and links to the red signals - the current big question of the show - it takes nothing away from the tale of a group of humans on a far-away planet in the Beta quadrant looking for answers. This, coupled with a religion vs science theme throughout, will give traditional Trek fans probably the closest Discovery episode to the Original Series so far. And yet, it’s so much better than that as well. For me, New Eden is the perfect mix of Star Trek old and new, of Original Series and Discovery, of what we want and what we need.

Discover more must-watch series with our breakdown of the best new TV shows coming this year.

After the excitement of the premiere, Star Trek Discovery season 2 calms things down a bit with a classic away mission story, which will both delight and satisfy Trekkies everywhere.