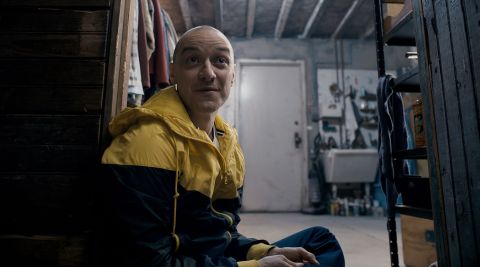 This is a Shyamalan movie through and through. And it’s his best in some time, thanks to a magnetic McAvoy.

Meet Dennis. He wears glasses, has OCD and kidnaps girls from parking lots. Dennis lives in a windowless basement with Hedwig, a nine-year-old who loves Kanye West (“He’s my main man!”) and keeps hamsters.

Dennis and Hedwig are kept in line by Patricia, a prim matriarch who likes sweaters, brooches and carving knives. And then there’s Barry, a wannabe fashion designer who freely admits he has “feelings of being overwhelmed”.

Then again, Barry might be Dennis. Or Jade, or Samuel, or any one of the other “alters” that live inside Kevin (James McAvoy), a troubled young man whose dissociative identity disorder (DID for short) means he has 23 distinct personalities fighting for his body.

Small wonder that his prisoners Casey (Anya Taylor-Joy), Marcia (Jessica Sula) and Claire (Haley Lu Richardson) are as bemused as they are terrified. Not only do they not know why they’ve been abducted, they also don’t know by whom.

We’re used to fiendish plots emanating from M. Night Shyamalan, the precocious wunderkind behind The Sixth Sense and Signs whose career became a rocky road since The Village (2004).

Split, though, might well be his most compellingly warped concoction to date, its genre trappings – think Room meets The Missing at 10 Cloverfield Lane – acting merely as gateway drugs to the altogether more demented thriller taking place within Kevin’s noggin.

The film’s torment of its female leads does border at times on exploitation; on the other hand, it does pave the way for Casey to come into her own, the character’s history of abuse giving the nous she’ll need if she’s to survive this subterranean nightmare.

Taylor-Joy, so impressive in The Witch, is even finer here as a deceptively docile captive whose passivity masks both intelligence and gumption. Yet it would be foolish to suggest this is anything but James McAvoy’s movie.

In a role that’s effectively a dozen performances in one, the X-Men actor is simply astounding. Chillingly cold one moment, malevolently mumsy the next, he offers the modern equivalent of Alec Guinness’ turn in Kind Hearts and Coronets: a masterclass in physical dexterity and vocal control that builds towards a volcanic eruption of bestial, vein-bulging ferocity when yet another, submerged personality comes bubbling to the surface.

(He is also very funny, grace notes such as Patricia’s conspiratorial winks and Hedwig’s lisp – “eck-thetawa!” – ensuring each persona can both tickle and unsettle.)

It’s too early to say if Split marks the beginning of a return to form for Shyamalan; after all, he’s let us down before. But by the end, those who’ve stuck with him throughout will have ample cause to feel their faith was justified.

This is a Shyamalan movie through and through. And it’s his best in some time, thanks to a magnetic McAvoy.