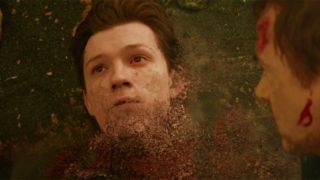 The Snap. The Snappening. The Dusting. Thanos’ attempt to kill off half the universe in Avengers: Infinity War (and subsequent second snap by Iron Man in Avengers: Endgame to bring everyone back) has been known by many names. We can add one more to that list, all thanks to Spider-Man: Far From Home.

The change comes within one of the very first scenes of the Spidey sequel. No spoilers here, but Betty Brant returns for another dose of high school news report hijinks alongside her peppy co-host, Jason.

In what serves as both a recap of the fallout from Endgame and one of the funniest scenes in MCU history, Brant reveals that the five-year gap between the original Thanos snap and Iron Man hitting the retcon button is… The Blip.

The Spider-Man: Far From Home scene also reveals the consequences of The Blip. Namely, everything is massively out of whack. Younger brothers are now older, for example, and there are some unintentionally hilarious shots of the moment in Peter Parker’s school where the dustees return.

Betty Brant even eye-rolls her way through the fact that she’s being made to retake the school year again after the sudden return of the previously-thought dead classmates. The GPA is that important to her, huh?

It remains to be seen whether the name will officially stick, though it definitely feels like it lacks the punch of a Snap. For now, The Blip is here to stay. That is, until some other universe-disrupting event inevitably comes along and makes The Blip look like A Walk in The Park.

This might not be the last you've heard of The Blip. Here are some of the new Marvel movies coming up over the horizon.