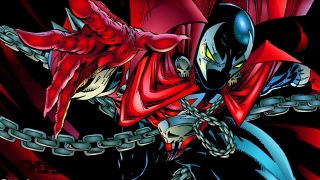 Well, here's some Hollywood news I never expected to write: a live-action Spawn movie has cast an Oscar-winning actor as its comic book anti-hero. Deadline reports that Jamie Foxx will take up the cape as Al Simmons (aka Spawn), a mercenary who dies, gets a symbiotic suit from a being who, for all intents and purposes, is the devil, and uses his Hell-given gifts to fight crime and other evil-doers back on Earth.

This will be Foxx's second time starring in a comic book adaptation movie, after a turn as Electro in The Uninspired-... er, sorry, Amazing Spider-Man 2. Still, the man does have an Oscar for his portrayal of Ray Charles in Ray (2005) and his roles in Djano Unchained and Baby Driver show he can still nail a part when push comes to shove.

So can he portray a brooding, undead antihero? He might not have to try very hard - Spawn creator Todd McFarlane, who is set to write and direct, said at San Diego Comic-Con 2017 that the character won't be front and center like he was in the famously terrible 1997 version. Instead, this new Spawn film would keep the character largely in the shadows and of few (if any) words; McFarlane wants the film to have a horror vibe, which fits with the comic's often gruesome and grotesque themes.

"The scariest movies, from Jaws to John Carpenter’s The Thing, or The Grudge and The Ring, the boogeyman doesn’t talk," McFarlane told Deadline. "It confuses people because of the comic book industry, and because they all default into their Captain America mindset and I keep saying, 'No, get into John Carpenter’s mindset or Hitchcock.' This is not a man in a rubber suit, it’s not a hero that’s going to come and save the damsel. It’s none of that. At the end of the movie, I’m hoping that the audience will say either, 'Is this a ghost that turns into a man, or is it a man that turns into a ghost?'"

There's no set release window for this new vision of Spawn just yet, but count me just a little more intrigued on hearing this news.