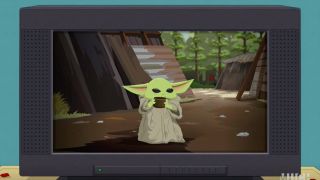 Baby Yoda has, as anyone who reads the pages of GamesRadar+ knows, taken the world by storm. We – as in, mankind – can't get enough of The Mandalorian's cute little green guy. So it was only a matter of time before South Park decided to poke fun at the viral phenomenon.

On the penultimate episode of season 23, titled "Basic Cable," writers Trey Parker and Matt Stone decided to jab at Baby Yoda and Disney Plus. The story follows Scott Malkinson and his attempt to sell his own show, the aptly titled “The Scott Malkinson Show,” to a streaming service. Why? Because his crush really, really likes Baby Yoda, and maybe if he's got a deal with a streaming service, she'll like him.

Unfortunately, Scott's father works for a cable company and, as a result, is angry that his own son would look to streaming, especially as the new form of TV watching is driving down the quality of cable TV shows. However, after all the conflict, Scott puts an advert on television that he hopes will get a streaming service to buy his show.

Funnily enough, the number advertised by Scott actually works! Rather than a person answering, an automated machine lists off a number of shows that are available to purchase for obscene amounts of money.

There you have it – Baby Yoda has already made his way onto South Park. The pose he's making is the exact one seen in the most recent episode of The Mandalorian, in which the creature sips soup from a mug. Director Bryce Dallas Howard recently spoke about getting Baby Yoda's actions just right for the meme-worthy moment.