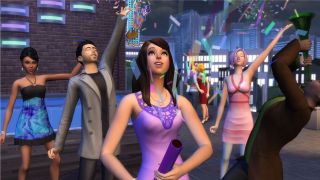 The Sims turns 20 today, and yes, you are also old. But don't worry, as celebrations are commencing, developer Maxis has confirmed that every Sims player will be gifted a hot tub.

It's not just any hot tub though, The Sims 4 is bringing back the return of *the* hot tub - you know, the first thing you placed in your house in the original Sims when you were 14 because you had just watched Rock of Love with Bret Michaels. That's right, Simmers on any platform can celebrate indulgently with the 20th Birthday Hot Tub, dropping for free in a small update today. Finally, something that will temporarily distract you from your finite stay on this planet.

PlayStation Plus members will get free access to The Sims 4 for the entire month of February, so if you haven't jumped in and created an idealized version of yourself, now's the time to do it. EA has also released a hilarious infographic detailing some of the game's highlights from the last two decades, and frankly, I'm disappointed at the number of woohoos.

Here are some highlights from the official Sims infographic, spanning four games and more than 75 packs:

Check out the entire infographic below and get more news about the festivities here.

If you're looking to celebrate 20 years of unexpected pool drownings and tragic cooking accidents IRL, check out the Threadless Sims 20th birthday collection. I'm partial to the floral-patterned Sims logo, but I'm a sucker for palm print.

Also, I celebrated 20 years of the Sims by building a tiny house in the Sims 4, and it was incredibly stressful.