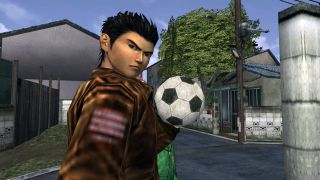 Shenmue 3 is still coming and is definitely not a collective hallucination, but what about the many folks who never played the first two games? Or those Shenmue fans who want to refresh their memory a decade and a half later - without having to steal their Dreamcast back from the museum?

Sega Europe community and social marketing manager Dan Sheridan (no relation) said in the latest Sega Central video that the company would be happy to put out HD remakes of the existing Shenmue games - but that it wouldn't be a simple process.

"Of course we would love to release these tomorrow," Sheridan said. "Sadly it's not as simple as porting the games to the current platforms as we would need to ensure that any HD remaster lived up to the quality of the original titles. And with games as immersive as Shenmue 1 and 2, there are further complications from licensed products that were included in the original games. That said, we'd love to do it, and are currently investigating how to make it a reality."

If you weren't aware, the Japanese version of Shenmue totally had licensed Coca-Cola machines, among other real-world products. Here's Ryo throwing back a can of Coke (note he could have also gone with Orange Fanta, Grape Fanta, or Sprite).

Shenmue 3 is still slated for a December 2017 release date, which doesn't give Sega much time to get those HD remasters together if it's not already working on them. It's a lot simpler than making a whole new game, granted, but as Sheridan (still no relation, at least that I know of) says it would still take plenty of work.