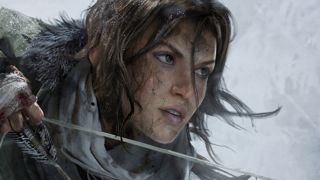 People who look over at your screen - whether it be your phone, laptop, or something else - are just the worst, aren't they? Okay, now let's all take a look at what Redditor Tripleh280 claims they saw on the laptop of someone riding Montreal public transit:

Tripleh280 says that the (incredibly blurry) title you see in the corner there is "Shadow of the Tomb Raider." Not a bad name for the third game in the rebooted Tomb Raider franchise. While we can't say for certain whether this is legit, Kotaku reports that sources tell them at least the name matches.

Montreal is home to several large game studios, though most notably in this case, Eidos Montreal. While both Tomb Raider (2013) and Rise of the Tomb Raider were developed by Crystal Dynamics - located in Redwood, CA - this screengrab by Tripleh280 would suggest that Shadow is being developed by the people behind the recent Deus Ex games. Whether Eidos has taken over completely or is just helping co-develop with Crystal Dynamics is something we probably won't know until the game is officially announced.

Now, stop looking at other peoples' screens. It's rude. And developers, maybe don't work on unannounced projects in highly-public places.