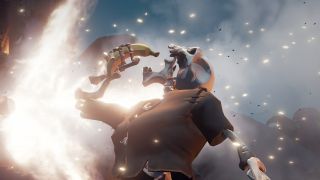 Working for the Order of Souls can be hard because you have to kill a lot of skeletons. But, it can be quite lucrative and has some of the best, coolest looking gear. If you want to make it with Sea of Thieves goth faction then we've got a complete Order of Souls guide to help you maximise gold and get all those lovely outfits.

How to grind Order of Souls reputation

The best way to level up your Order of Souls reputation is simple: do Voyages for the Order of Souls. Your Voyage should begin at your nearest outpost (the civilized islands where you typically begin your Sea of Thieves session). Look for the Order of Souls banner, a stylized white eye on a purple background, and you'll find one of their representatives nearby. Pick up a Voyage - the first crop are free - head to your boat, lay it on the captain's table, vote for it, and then find the island listed on your bounty warrant on the ship's map.

Once you make your way to the island, use your spyglass to determine where the skeletons are gathered (listen for their raspy groans if you need to search on foot). You must clear out several waves of skeletons before their captain - your true target, and a mightier foe - appears. Battle the captain to its (second) death, take its skull back to your ship, then return it to an outpost to sell it to the Order of Souls. Any Souls rep will do, it doesn't have to be the one you got the voyage from. Note that you can also earn Order of Souls commendations and experience for bringing in Skeleton Fort Captain skulls, so keep an eye out for ominous skull clouds on the horizon indicating their presence. You can't really grind those, though, since they only pop up every so often.

How Order of Souls progression works

When you first start working for the Order of Souls, you won't be able to access any of their exclusive rewards (keep scrolling for more on those) and all of their Voyage will result in relatively small gold rewards. Once you build up your reputation to level 5, you can purchase a promotion, which unlocks new rewards and increases the quality of Voyages you can undertake. You'll have to start paying for Voyages at this point - the price increases with every promotion you purchase - but the potential rewards get bigger too.

How to solo level Order of Souls

Being the combat-focused faction, you may worry that you'll need a crew to make progress with the Order of Souls. Don't worry about it! Your Voyages will go faster with a good crew full of hearty maties - and you'll probably have more fun, since Sea of Thieves is meant to be a social game - but you can totally tear through Order of Souls voyages all on your own. Check out our Sea of Thieves solo play tips for more general advice, and make sure you read through these skeleton combat tips to get a solid start on your one-pirate undead rampage.

Save your ammo: It's tempting to load up with a pistol and a blunderbuss for extra damage, but you'll be one sorry buccaneer once you run out of ammo. Whenever possible, take down skeletons with your cutlass instead. Hold RT to charge up a powerful thrust that can kill several at once!

Load up on bananas and search for more: You should always stock up on bananas before you head into a fight. Better still, search for another barrel before full of 'em before you start skirmishing. That way you'll be able to grab more healing goodness in a hurry.

Watch out for skeletons with guns: Skeletons can wield all the same weapons that living pirates can and they are surprisingly proficient with them! Circle strafe and bunny hop all you want, you'll still have little luck evading their pistol or blunderbuss fire. Your best bet is to break their line of sight then attack when you're ready. Don't be afraid to get in close when the time is right - every third slash or so with your cutlass will stun a normal skeleton, resetting their firing cycle. Or just shoot them.

Use your ship to your advantage: Pull your ship up close enough to the island and you can use either your cannons or sniper rifle to pick off skeletons without fear of retribution. Wise pirates never fight fair! You'll probably still have to disembark to clear out the stragglers, of course.

Special skeletons have special vulnerabilities: Advance far enough with the Order of Souls and they'll start sending you off to fight even stranger and more powerful forms of the undead. If you feel like you're not making much progress, try to exploit their logical weaknesses: Gold Skeletons are freaky terminators but they rust over and slow down when wet (they must be made with some kind of special gold alloy that rusts), so either fight them in the ocean or splash them with your bucket; Shadow Skeletons are empowered by the darkness, so fight them in the daylight or flash them with your lantern. Overgrown skeletons with plants coming out of their ribcage are stronger in the water, so keep them away from any puddles or the shore if they amble into view.

Every trading company has special rewards that only their esteemed members are allowed to purchase. Remember that both the rewards and voyages you have access to aren't based directly on your level - you have to purchase promotions to get them! Early to mid-level Order of Souls rewards currently take the form of fancy grog mugs and lanterns. The first grog mug makes the liquid inside look kinda like Mountain Dew: Baja Blast, but it still seems to work the same as the normal mug; i.e. drinking from it gets you drunk at the same rate (and yes I did do some Scientific Research to determine this). Meanwhile, the first Order of Souls lantern reward casts an eerie blue light that should turn heads.

What happens at Order of Souls max level?

The current reputation level cap for each faction is 50, and we know you have to reach that level for all three to complete the special Voyage to becoming a Pirate Legend. However, the specific high-level happenings for Order of Souls are still unknown because people haven't had time to unlock them yet, and Rare is in no hurry to spoil the surprise. Looking at the early rewards, it seems safe to say that you'll be kitted out like the coolest goth pirate on the seven seas by the time you reach that point.

Before you take to the high seas, make sure you find out how to get Sea of Thieves' Day One Patch before it's gone - and no, it isn't what it sounds like.

Connor Sheridan
Connor has been doing news and feature things for GamesRadar+ since 2012, which is suddenly a long time ago. How on earth did that happen?
See comments