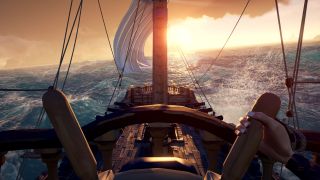 The new Sea of Thieves Tall Tales added with the Anniversary Update are a series of story missions and exactly what the game needed. A Tall Tales guide will be handy though as there's a lot to do and plenty of puzzle solving and exploring.

There's a lot on offer from jungles and pirate lords, underwater puzzles and ghosts aplenty. Even if it wasn't without a few tricky bits it's different enough that a few Sea of Thieves Tall Tales tips wouldn't go amiss just to introduce you to all the new stuff. Each mission can take up to a couple of hours to finish, and if you want to cut down on time wasting this Sea of Thieves Tall Tales guide should help you with any solutions or objects you can't quite get. This provides a short cheat sheet to every Tall Tale in the game, and also links out to a some more in-depth guides that  go into extra detail if you need it.

The Sea of Thieves Shroudbreaker Tall Tale is the first in the game and you can pick it up as soon as you log in. Head over to the Mysterious Stranger in any given tavern and vote for it atop the barrel to his right. As he will explain, this mission is all about finding the Shroudbreaker, a key item locked up in an ancient vault. Here’s how to beat it.

The Sea of Thieves Cursed Rogue Tall Tale is picked up at Plunder Outpost in the Order of Souls tent. Chat to Madame Olivia to get going and let’s take on Captain Briggsy!

Head over to Ancient Spire Outpost and speak to the barkeep Tasha, who Olivia mentioned whilst wrapping up The Cursed Rogue. Vote for the tale and get ready for an adventure.

Stars of a Thief Tall Tale

You Sea of Thieves Stars of a Thief mission in the middle of nowhere. Head to Sudds counter at the Northern Star Seapost to vote on the book and listen to his lovely Scottish accent.

Head to the Order of Souls tent at Sanctuary Outpost to kick off the Sea of Thieves Wild Rose quest about love on the high seas.

The Art of the Trickster Tall Tale

Kick off this quest by heading to Plunder Valley and speaking to the skeleton parrot, Salty, who can be found near the shore next to a wrecked ship and a campfire.

The Fate of the Morningstar Tall Tale

Pop your clogs and head to the Ferry of the Damned for this mission. Chat to the bloke manning the wheel, the tale is on a plinth to his left.

Revenge of the Morningstar Tall Tale

Travel to Dagger Tooth Outpost and you’ll find the book to the right of the shipwright, Sandra. Vote for it and get ready for a dive.

This is the big one. Get ready for the final adventure. Head over to Morrow’s Peak Outpost and vote for the tale on the platform next to the tavern.