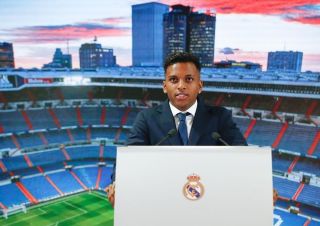 He's been in the news for some time now, but what can the Rodrygo FIFA 19 stats tell us about the star player after he moved to Real Madrid? Rodrygo is a name that may be more familiar to Football Manager 2019 fans than FIFA 19 players, but in a bid to learn more about the player going into the first season after his big money move, let's take a look at the Rodrygo FIFA 19 and Football Manager stats and potential.

If you're looking for the Rodrygo FIFA 19 stats then you've come to the right place... sort of. During the 2018/19 season, Rodrygo was on loan at Santos in the Brazilian First Division. Due to laws in South America about representing players in-game, while Santos is in the game, Rodrygo himself isn't. Therefore it's impossible to look at his FIFA 19 stats because, well, there are none. With that said, Rodrygo is in Football Manager 2019, which tends to be much more accurate anyway, so let us take a look.

In Football Manager 2019, Rodrygo turns out to be an absolute monster. He's only 18 years old in real life and his best position is on the left wing, but he can also play up top. From the get-go he boasts an impressive 15 dribbling, technique, first touch, and flair... that sounds like the sort of player Real Madrid is fond of.

A few years down the line and by the time he's 22, his dribbling is up to a staggering 18, with 17 technique and first touch, along with 16 finishing. Another few years on and Rodrygo has played for Real Madrid, AS Monaco on loan, then moved to City for £150m before going over to PSG for £147m. In 254 total career appearances, he's scored 124 goals with 37 assists for an average rating of 7.37. Add on his 50 caps for Brazil and it's not too shabby for a player who's only 25. This is in my save where I won the domestic treble in England last season, and my scout reckons I should "sign Rodrygo whatever the price", with a 98 recommendation.

Football Manager is known for being scarily accurate when it comes to predicting players for the future, and they have Rodrygo as runner up of the player of the year award in 2023 behind Mbappe, then he wins it in 2024 ahead of Anthony Martial. It looks like Real Madrid have a future star on their hands, and when Rodrygo is in FIFA 20 later this year, no doubt he's going to be outstanding.