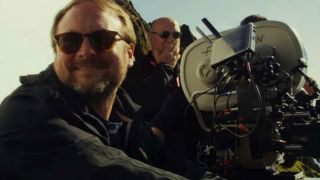 While Star Wars: The Last Jedi is (obviously) at the front of everyone’s minds right now, director Rian Johnson is looking towards the future. His upcoming Star Wars trilogy is going to require a lot of work, but you wouldn’t know it from his pitch to Lucasfilm and Disney higher-ups. He didn’t even include a story outline – but his pitch will make you feel like a child watching Star Wars for the very first time.

Speaking to /Film, Johnson laid out the story of finishing up his time on The Last Jedi and the mutual feeling between himself and Kathleen Kennedy about wanting to work together. “[We were saying] how do we keep working together? And that I threw out… the most interesting thing to me would be a new trilogy.”

Bold. Very bold. Most pitches start small. Johnson envisioned a multi-movie franchise right off the bat. To make freelancers everywhere even more envious of his chutzpah, Johnson outlined his (very short) brief for the trilogy: “One story told over three movies,” Johnson revealed, “Go new places, meet new folks, come up with a new story to tell in the Star Wars universe. The sky’s the limit… and they really responded to that.”

Admit it, that makes you a little hot under the collar, doesn’t it? Niche (relatively speaking) games and animated series aside, we’ve not had a fully-fledged, fresh, big budget Star Wars adventure to kick off a new story since A New Hope.

Everything else in the Star Wars universe has been tied to previous stories and sagas in some way but now… now we’re getting something completely new – and I can’t wait to see what Rian Johnson does next.

Rian Johnson’s Star Wars trilogy pitch offers more questions than answers and - how’s this for a segue - there are 12 big questions we have after watching Star Wars: The Last Jedi. Massive, massive spoilers in that link. You’ve been warned.