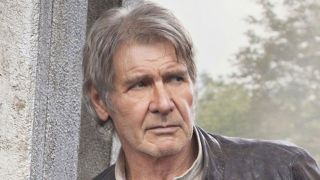 Star Wars: The Last Jedi had a lot going on. One thing it didn’t address, however, was the quality bit of father/son bonding time that went down in Star Wars: The Force Awakens. Han Solo – for so long the lifeblood of the franchise – died and, yeah, that was pretty much it. Rian Johnson explains why we didn’t see a funeral (or any response at all, really) – and it carries on a Star Wars tradition found way back in A New Hope…

Speaking to Collider, Johnson reveals that a funeral for Han Solo was never on the table and that “pacing-wise it didn’t have a place. It’s tough in Star Wars because I always think about the mourning that Luke gives to Ben’s death, which is all of four-and-a-half seconds before, ‘Come on kid we’re not out of this yet’ and then boom, you’re into ‘Yay, woo-hoo! Don’t get cocky!’ There’s the moment for it, but it’s not long.”

It’s worth pointing out that the director attributed a very similar reasoning to why we didn’t find out all that much about Snoke. For those looking for closure with Han, it probably comes right at the end of The Force Awakens when Leia hugs Rey. Then, as all heroes do, they move forward.

The funeral scene rumour in particular, though, also stems from a choice Carrie Fisher quote from 2016’s Star Wars Celebration, in which she indiscreetly mentioned ‘Han’s funeral’. As it turns out, it appeared to be a bit of wicked misdirection from the late actress.

Johnson ends the topic on these words and, really, it’s a nice summary of the beauty of Star Wars as a whole. “We don’t have time for our sorrows, commanders. That’s kind of the thing of Star Wars; you don’t really linger on grief because you’re moving forward.”

Luke did it with Ben, Leia did it with Han – and I’m sure Star Wars 9 will deal with death in the same way too. Though if Jar Jar Binks died I’d definitely be cracking out the jelly and ice cream.

The conversation around Star Wars: The Last Jedi is almost bigger than the movie itself. Check out why we might hear more about Rey's parents in Star Wars 9, as well as the first look at a deleted scene from The Last Jedi.