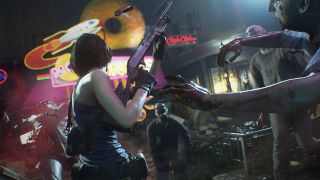 After the runaway success that was Capcom’s Resident Evil 2 remake, it’s no surprise that the publisher has quickly moved on to recreating 1999’s Resident Evil 3: Nemesis for modern consoles. At the time it was well-received for its claustrophobic, tense atmosphere and of course, Nemesis, the big spooky monster with gums for days. Here’s everything we know so far about Resident Evil 3 remake, from the release date to the potential gameplay tweaks.

Resident Evil 3 release date - when is it coming out?

Resident Evil 3 will land on store shelves on April 3 this year for PS4, Xbox One and PC. It was first announced during a State of Play presentation in December of 2019.

Resident Evil 3 gameplay - how will it play?

The game is being built in the RE Engine, the same driving force behind 2019’s stunning Resident Evil 2 remake and 2017’s first-person Biohazard outing, Resident Evil 7. This means you can expect lots of photogrammetry and detailed face models. It’ll play a lot like its remade predecessor with an over-the-shoulder perspective and a player-controlled camera, unlike the fixed angle style of the 90s original. The announcement trailer teased a first-person approach like Resident Evil 7 in its opening gameplay crawl, which many players have been asking for since the release of Resident Evil 2 Remake. Perhaps we’ll be able to experience the game from both perspectives this time around, or at least in certain scripted moments. Glimpses of gameplay offered up typically smooth animations and satisfying recoil-heavy weighted shooting, the kind we’ve come to expect from Capcom’s latest Resident Evil games. Zombies amble around in convincing fashion as they seek to latch onto Jill’s limbs for a quick-time chomp.

As well as the core campaign, players who purchase Resident Evil 3 on launch can expect the addition of Resident Evil: Resistance, a multiplayer offshoot that will be familiar to those of you who’ve played Dead by Daylight or Friday the 13th. An asymmetrical multiplayer experience, Project Resistance is a 4 v 1 claustrophobic nightmare where teams of human players are pitted against a Mastermind, an omnipotent evil deity that can place traps and creatures depending on what cards you draw into your deck. Masterminds can also embody monsters like Lickers and Mr X to disrupt the survivors. It’ll also introduce the most exciting new Capcom character of 2020, Martin Sandwich.

The core Resident Evil 3 characters and cast have been redesigned

Jill Valentine and her pals have a new look for the remake that retains the 90s vibe whilst making their designs feel a lot more practical for the apocalyptic environment. Jill looks ready for combat and Carlos has a fuzzy afro and beard combo and a pair of glistening guns. Nemesis’ toothy smile remains but the entire design has been altered, its gooey face stretched even more aggressively over a mushy skull. Gross! We’re yet to get a full glimpse of the character design but it is safe to say that this horrible brutish squid man will be spooky enough to jolt you out of your seat when we sit down to play the Resident Evil 3 remake in April.

The story of Resident Evil 3 is actually a prequel to Resident Evil 2 (I know, it’s very confusing) and follows Jill Valentine, a S.T.A.R.S. officer who has to get out of Raccoon City whilst being hunted by Nemesis, a massive hulking bioweapon who has got her number. Valentine observed the Umbrella Corporation’s terrible experiments in the first Resident Evil game and has the knowledge to take them down, so the big brute is sent out to clean up the mess and stop the knowledge spreading.

The game occurs 24 hours before Resident Evil 2 in the thick of the outbreak - you can now hear Nemesis yell “STARS” in the updated Resident Evil 2 police department demo. Another update to Resident Evil 2 means that you can also find a letter in Kendo’s shop that Jill left during her short stay in the city. Along the way, she’ll meet (and lose) many friends who have since gone on to become iconic Resi characters. If you enjoyed Resident Evil 2’s premise, you’ll no doubt latch onto this one with no questions asked.

In between the duo of producer’s explanations, we can see more of Resident Evil 3’s neon-soaked, gritty world in the above trailer released in December of last year. It looks like there’ll be a lot more locations in the sequel to the remake, including more time spent outside the confines of the labyrinthine police department. You’ll be experiencing the start of the outbreak in the city, so there should be more survivors to contact and engage with. The third game is a lot more action-oriented than the more quiet and considered Resident Evil 2, and this is reflected in the abilities of Nemesis, who has “more ways” to track down Valentine than the Tyrant does in Resident Evil 2.

The trailer also dwells on the way Project REsistance plays, showing players collaborating to batter zombies and escape traps, all the while the evil director plants Lickers and those terrible, poisonous greenhouse zombies that appeared in Resident Evil 2 remake.

Much like Resident Evil 2 before it, Resident Evil 3 will receive a collector’s edition which features a figurine of the main protagonist. Bundled in with the collector’s edition is an 11” figure of Jill on a S.T.A.R.S. base, armed to the teeth with weapons. You’ll also receive a double-sided map and a collector’s artbook, as well as a digital means to download the game’s soundtrack. This all comes packaged in an item box from the game emblazoned with the S.T.A.R.S. insignia.