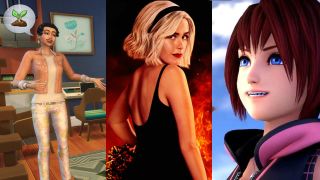 If you want to decrease your carbon footprint but are too lazy to make some real-world changes, why not start with the Tiny Living Stuff Pack? The latest Sims 4 expansion is bringing eco-friendly options, with a residential lot that only takes up 100 tiles on the Build Mode board and accessories that include a foldaway bed (live dangerously), chunky knit sweaters, and more tiny, adorable things.

The Sims 4 tiny home community is huge, and now EA is dedicating a pack to thinking big but building small. The options are endless, the results are adorable, and your Sim can now assume superiority over all the other big, pollute-y Sims. It's a win-win.

2. Kingdom Hearts 3 ReMind DLC gives the perfect excuse to reunite with Sora and the gang again

If you've been itching for a good excuse to get stuck back into the world of Kingdom Hearts 3, the upcoming ReMind DLC has you covered. ReMind adds additional story content that's set a short while before the final battle, and tells the "other tale that unfolded during the climax of Kingdom Hearts 3." Apparently our hero Sora is set to "discover truths that he has never before imagined." Sounds pretty intriguing, doesn't it? Outside of the new story content, the DLC is stuffed full of extra Kingdom Hearts goodness, including 13 boss battles, a secret episode and boss battle, a new slideshow photo feature, and new difficulty settings and gameplay challenges. Oh boy, that's a lot of content! If you're hoping to catch this on Xbox One, you'll have to wait it out just a little longer.

What: Kingdom Hearts 3 ReMind DLC
Where: PS4
When: January 23

There hasn’t been a better time to be a Star Trek fan. Not only is the brilliant Star Trek: Discovery season 3 on the way, plus the animated Star Trek: Lower Decks and two as-yet-unannounced Star Trek shows, but a true Starfleet icon is about to return to action in Star Trek: Picard.

Captain Jean-Luc Picard, played by Patrick Stewart, is arguably the definitive commanding officer in Star Trek history – a man who’s quiet authority and calmness under pressure saved the galaxy on numerous occasions. Star Trek: Picard picks up with Jean-Luc some two decades after the events of Star Trek: Nemesis (2002), and will feature a retired Picard stepping up to help a mysterious young woman in danger. He’ll also be meeting some familiar faces from his Next Generation past…

This is the ultimate show for TNG lovers, and promises to bring together the Trek timelines as we go into an unknown future. We cannot wait!

What: Star Trek: Picard
Where: CBS All Acces (US)/Amazon (UK)
When: January 23

4. The Gentlemen has a criminally good cast – and a sense of style to match

Guy Ritchie may have wandered off into the world of myth and monsters with his last two flicks – King Arthur and Aladdin – but The Gentlemen finds the director in more familiar territory: slumming it with the crime bosses of London.

The Gentlemen is a flashy adrenaline-fulled tale filled with shootouts, betrayals, and several quotable lines kept in the chamber at all times, ready to be fired at any moment. The slimy and sleazy lot that make up the story included Matthew McConaughey’s bullish Pearson, Hugh Grant’s smarmy Fletcher, and the ambitious Dry Eye, played by Henry Golding. Each attempts to out-do the other when on-screen in a beautiful display of chewery-gnawing and cheesy melodrama.

It’s low-key a fantastic cast, too,  filled with talent from both sides of the Atlantic – and, whether you’re a fan of Ritchie’s style or not, it makes for a perfect movie to switch off for two hours and wipe away the lingering New Year’s haze.

What: The Gentlemen
Where: Movie theaters
When: January 24

5. Sabrina is back to bewitch us with a new season on Netflix

Being the Queen of Hell isn't all fun and games, and everyone's favorite teenage witch is about to find that out in season 3 of the Netflix spellcasting saga. Kiernan Shipka looks set to continue to prove that she's the perfect choice to play the feisty lead, and will have to face a Midsommar style cult - complete with Coachella flower crowns - to keep Greendale safe. Sam Corlett joins the cast as Prince Caliban, another member of hell royalty.