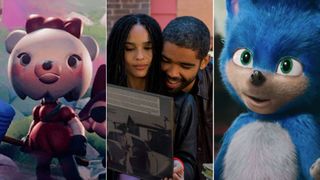 1. Hang on to your heartstrings, because Lara Jean Covey and Peter Kavinsky are back on Netflix

Unless you've had your heart turned to stone by an evil curse, it'll skip a beat at the idea of a sequel to Netflix's rom-com To All the Boys I've Loved Before. We left Lara Jean and Peter as a new and happy couple, but when one of her old love letters elicits a response from a former crush, it gets complicated. The movie looks like the equivalent of a warm bubble bath that smells like cotton candy, but with just enough smart one-liners and romantic drama to keep you on your toes. Perfect Valentine's viewing whether you're looking to Netflix and chill, or Netflix and die alone. Rachel Weber

What: To All the Boys: P.S. I Still Love You
Where: Netflix
When: February 12

2. The final release of Dreams will let you unleash your creative side and bring your imagination to life

Media Molecule's creative tool Dreams is finally coming out of early access with the full release on PS4, and with UI improvements, more helpful tutorials, and lots of extra premade goodies to use in your creations, you can truly let your imagination loose. Since it went into early access in spring of last year, we've seen a whole host of incredible creations. From folks remaking entire games such as Metal Gear Solid and Final Fantasy 7, to serving up a ridiculously realistic-looking full English breakfast, and re-creating Spider-Ham, there's no limit to what you can do. There's even going to be a new story campaign called Art's Dream. Made with all of the tools you have access to in the game, the campaign showcases just what the Dreams' editor is capable of. If you've been waiting to bring your creations to life and let your creativity flourish, the upcoming release is the perfect time to jump right in. Heather Wald

What: Dreams full release
Where: PS4
When: February 14

It's safe to say that a cranky, obsessive, middle-aged white dude that's a huge record snob would not be an ideal protagonist in today's economy. Now, that doesn't detract from the John Cusack version of Nick Hornby's novel High Fidelity, because it's a classic. But High Fidelity 2020 is all about modernization - the show cleverly gender and race swaps Rob the record store owner, casting Zoe Kravitz in the role and moving the store from Chicago to Brooklyn.

Kravitz' Rob does justice to the original and Cusack versions of Rob: she's just as obsessed with her exes, she's still clinging on to analog in a world of digital, and she's very rude to potential customers, despite the store's fledgling profits. If you're like me and the thought of Zoe Kravitz being very rude to you could be considered foreplay, then this is the show for you. Expect dry humor, excellent music, and heartbreak - it's the perfect show to debut on Valentine's Day.

I would be remiss if I did not note that Kravitz' mother, the ageless Lisa Bonet, played one of John Cuscak's love interests in the 2000 flick. Gotta love that. Alyssa Mercante

What: High Fidelity
Where: Hulu
When: February 14

4. Writing off the Sonic movie? Not so fast! The blue blur could break the video game movie curse

It’s almost impossible to believe that it’s taken over a quarter of a century for the spiky SEGA mascot to get his own movie, yet the big day is finally here. But amid redesign controversies, a release date delay, and, oh god, the teeth, it can be easy to dismiss Sonic the Hedgehog’s big-screen bow. You absolutely shouldn’t. After all, it could be that rare thing: a quality video game movie.

The cast alone should have you racing down to the theaters. Jim Carrey looks to have returned to his classic slapstick comedy stylings of the ‘90s, James Marsden is in the role he was born to play – human male – and the artist formerly known as Jean-Ralphio, Ben Schwartz, ties things all together with an effortlessly energetic performance as Sonic.

So, Spirits Within, Tomb Raider, and the (roughly) 504 Resident Evil movies that have been released had better watch out – a certain hedgehog is gunning for the crown. Bradley Russell

What: Sonic the Hedgehog
Where: Theaters
When: February 14

5. The DualShock 4 Back Button is basically your first official teaser for PS5

All eyes are on Sony to officially reveal more about the PS5, yet here we are, in February 2020, and the company is flogging curious attachments for the DualShock 4. Why? Well, rumour has it that PlayStation's latest Back Button accessory, which adds two programmable panels behind the grips of the PS4 controller, is designed to make it forward compatible with its next-gen successor. When you remember that recent Sony patents have shown off the DualShock 5 with its own in-built back buttons, the evidence seems pretty compelling. But are the Back Buttons worth a buy-in and of themselves? We're pretty fond of them, especially for getting the advantage in competitive FPS games, but anyone with an eye on the PS5 may want to hold off a purchase for the time being… Alex Avard