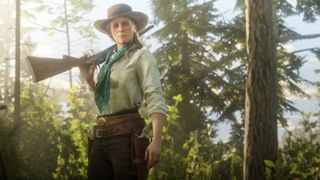 Rockstar may have only just opened its GTA Online casino after all these years, but fan discussion has already turned its attention back to the studio's other famed open world series in light of a new Red Dead Redemption 2 DLC rumour that's recently been doing the rounds on Reddit (as first reported by ComicBook).

According to a Reddit user by the name of throwaway11113454, a friend/environment artist at Rockstar has confirmed the studio is currently working on a large piece of story DLC for Red Dead Redemption 2, last year's open world western game, which is supposedly slated to release around December 2019/January 2020. The post states that the Red Dead Redemption 2 DLC will see you back playing as main protagonist Arthur Morgan, and will be focused on aliens, who have so far only appeared in the form of Easter eggs found across the game's open world.

Spoilers for those who have yet to finish the game, but if you've seen the Red Dead Redemption 2 ending, you might be surprised to hear about that Arthur Morgan could be returning for this instalment. In that case, it's likely that this DLC - if real - would play similarly to that of Red Dead Redemption's Undead Nightmare expansion, completely separate to the events of the main campaign.

The rumour also states that Rockstar is working on a full blown remake to the original Red Dead Redemption from 2010, incorporating all the new gameplay features and graphical upgrades from its sequel and even including new voice work from the main cast to retcon/recognise Arthur Morgan's presence in the story and connect the two games together more seamlessly.

Throwaway11113454's source says the Red Dead Redemption remake was intended to release in time for the game's 10th anniversary next year, but internal delays make a December 2020/January 2021 release window more likely. All that being said, as attractive a notion as all of this sounds, this rumour has little credibility to it, bearing all the chances of being completely made up.

With that in mind, don't so much take it with a pinch of salt, but several kilos of the stuff, as Rockstar is a notoriously well guarded entity, and the Reddit account itself has almost no online history to give any authority to its claims. Still, we can't help but wonder what Rockstar is working on besides Red Dead Online right now, especially as that recent GTA 6 leak is almost just as tantalising (and just as unfounded) as this one.

For more, check out our best Red Dead Redemption 2 tips to help you navigate New Hanover and beyond, or watch our Release Radar video below for a guide to everything else out this week.