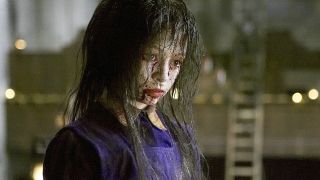 We’ve scoured our DVD archives, nightmares and the depths of YouTube for the most distressing and over-the-top deaths in horror movies from the last 50 years to bring you our 25 best deaths from the big screen. I’m going to put the painfully obvious gore warning here, as you should definitely be warned: this article is not for the faint-hearted!

1. Having your head turned inside out by a reverse bear trap.

This particularly nasty device was threatened in the original Saw when Amanda Young wakes up with a bear trap wired into her jaw but escaped. It wasn’t until the seventh outing, Saw 3D, that we actually, errr, saw it in action as poor Jill Tuck is executed inside the exact same murder machine that Amanda escaped. You’ve got some ketchup on your face, Jill….

2. A weathervane falls through your head, killing you instantly.

There’s only one word which accurately sums up this death: squish. Poor Patrick Troughton didn’t stand a chance against the church weathervane, and ever since I’ve been especially cautious about standing church walls in strong winds.

3. Drown in ground up pigs.

Ok, it’s not officially a death because the unfortunate victim gets saved at the last minute BUT it’s too good a Saw trap to miss on a technicality. Strapped to the bottom of a giant VAT, a judge is gradually drowned in a smoothie of ground up rotting pigs. Mmm. Maggots.

4. Impale yourself on a tree branch whilst fleeing for your life.

Forget Romeo and Juliet and Othello; this is the most tragic thing I’ve seen. You’ve got to be running at pretty overwhelming speeds to impale yourself so efficiently on a branch, but the adrenaline that comes from being chased by a misunderstood chainsaw-wielding chap just about makes it possible.

5. Barbed wire shoots into your orifices (yes, all of them), ‘violates’ you, and then rips you apart from the inside.

Yes, you read that correctly - all of your orifices. Even those particularly delicate ones. Silent Hill doesn’t mess around with character deaths - if it isn’t by via psychologically shattering monster, it’s by finding new ways to make bits of your body cringe out of fear in ways you never knew were possible.

6. Eaten by a bed and then spat out onto the ceiling.

Poor Johnny Depp. He gets all the luck. All the way back in 1984, Mr Jack Sparrow to be played Glen Lantz who falls victim to Freddy Krueger in spectacularly splattery style. Not only is the poor chap swallowed up by his own mattress, he’s spewed out onto the ceiling afterwards like a slightly off kebab.

7. Beheaded by a pane of sliding glass.

As well as being a bleak, neck-bothering reminder of the fragility of man, David Warner’s death in The Omen is just plain //unlucky//. Imagine the combination of variables that would lead to so specific an accident. It’s a harsh reminder to all glaziers to properly attach materials to your truck, and to always double check the handbrake is on. Rigorous health and safety is the enemy of The Devil.

8. Punched up the arse, eyes poked out and pulled inside out.

This is one of those deaths that keeps getting worse, in ways no sane person could even begin to imagine. Being punched in your backside is bad enough. But more horrible is someone reaching up inside you, plopping your eyes out from inside your head, then pulling you inside-out through your own anus, like some sort of reversed rubber glove made of raw bacon. I’m not speaking from experience, by the way.

9. Impaled to a wall by a machete.

Unkillable slasher villains are strong and love lifting people up by the throat like it’s no big deal to impale them on things. Halloween’s Michael Myers is one of the masters - the throat grab, the raise, the feet lifting off the ground. Always high scores from the judges for technique. The final definite thud of a knife going through your body and into the wall to hold you ends the process like a final fatal full stop. Leaving you hanging there like a human take out menu pinned to a giant notice board.

10. Diced into chunks by invisible wires.

Long before Saw gathered strangers together to kill them via a range of protracted and complicated murder machines, there was The Cube. It didn’t mess about with much of a ‘why’, just a bunch of randoms thrown into a shifting collection of rooms, each containing some sort of horrible death. The wires were it’s signature kill - you couldn’t see them and the people who met them couldn’t feel them. Just a shivery zing in the air and then the wait. A horrible, horrible wait for the red lines to appear across their body before a sudden an inescapable collapse into a pile of neatly diced flesh cubes.

The Cenobites (wear lots of leather, faceful of pins and metal) might sell their wares as exploring the realms of ultimate sensation but it’s basically hell. Hell with wires. Hell with hooks, fire, spikes, things pushed into holes that were never meant to accept anything. They’re just not nice people… things. Worse still, they’re extradimensional not very nice things so being pulled apart by chains lasts for ever.

12. Brain ground up by a propellor.

The joy of the Final Destination series comes from the domino effect of everyday things just layering up to create ultimate death traps. The death of Frankie Cheeks is probably one of the most ridiculous of these in the whole franchise, especially given the fact that he’s driving his convertible through a drive thru when he gets ground up by the back of a boat. Should have died on the coaster, Frankie…

When it comes to looking good, the words ‘no pain, no gain’ come to mind but perhaps not this much pain. When two bikini clad teens jump into the tanning salon for a quick top up of vitamin D, things don’t go so well when a plank falls over both sunbeds and the settings get cranked up to full. There’s no nice way to say that what happens next is distinctly George Foreman grill-like. Add in the graphic match to their two coffins in the next scene and this is peak comedy horror.

14. Cut into cubes by laser beams.

Obviously sentient insane AIs in the shape of little girls only invest in the best security systems. Like a rotating grid of slicing laser beams. You’ve tried your best, killed a lot of zombies but you messed it up at the last door and now you’ve got about three seconds to look at the pretty light before you body falls to the floor in a pile of bloody, slightly seared blocks. You died.

15. Shot in the trouser department by a harpoon then falling into a swimming pool.

Beams, lampposts, table edges. At one stage or another we’ve all had an unfortunate coming together of delicate parts and solid objects. It’s a pain that you remember for a long time after the incident so having them ripped away from your body by the serrated blades of a harpoon gun isn’t going to be a pleasant experience. In The Rage: Carrie 2 it happens to a guy, he’s been a dick though, so seeing it shoot off into the pool behind him is even sweeter. And then he drowns in the pool trying to retrieve his junk.