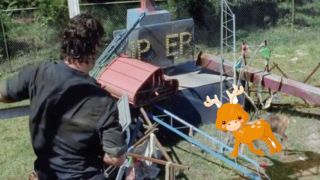 Oh dear, oh deer. The Walking Dead season 7 has been trudging along for some time now but it’s hit new depths with this week’s episode: namely, that CGI deer. What were they thinking? Who signed off on that? How many deer puns can I make? Maybe we’ll never know, but the internet had a whole lot of fun doing what it does best: poking fun at terrible special effects.

Did you hear the one about the price of the CGI venison? It was a little dear.

More realistic than that CGI deer on The Walking Dead tonight. pic.twitter.com/QTvxGqxFTFMarch 6, 2017

People are saying the deer from last nights episode is CGI, but I don't see it??🤔#TheWalkingDead pic.twitter.com/4QARCFapdUMarch 7, 2017

No animals were harmed in the making of this episode. But my eyeballs were.

That CGI deer in tonight's #TheWalkingDead though. pic.twitter.com/CEIg0PuICIMarch 7, 2017

Were they blind when they superimposed that? I've no eyed deer.

Did the walking dead go back to season one funding with CGI, Jesus that deer... #thewalkingdeaduk #TheWalkingDead pic.twitter.com/9diAA4z9wqMarch 6, 2017

I’m not exactly FAWNing over this one. *cough*

Game of Thrones can put dragons together, but The Walking Dead can't create a CGI deer? Yikes. pic.twitter.com/v6jDj1SgtlMarch 6, 2017

Y'all, I think I found the deer used in tonight's @TheWalkingDead! #TheWalkingDead #OhDeer pic.twitter.com/AYIG158RO5March 6, 2017

What did you think about CGI Deer-gate? Let us know in the comments.

The Walking Dead season 7 airs every Sunday on AMC in the US and every Monday on Sky Atlantic in the UK.