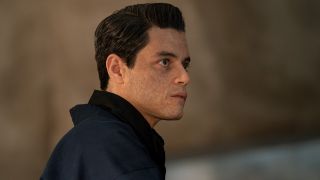 Daniel Craig’s fifth and final appearance as James Bond is looming, in the upcoming No Time To Die, the 25th film in the long-running superspy series. And he’s set to go out with a bang, facing off against a mysterious villain, Safin, played by Bohemian Rhapsody Oscar-winner Rami Malek.

As seen in the No Time To Die trailer, Safin wears a creepy mask, and is something of a sinister mirror image of 007. As he says, “Licence to kill, history of violence… I could be speaking to my own reflection.”

For Malek, Craig’s swansong provides the opportunity to hit the world’s greatest secret agent with with his toughest challenge yet. “When it’s Daniel’s final film, and the 25th instalment, you’re going to throw everything at him,” Malek tells our sister publication Total Film magazine in their new issue. You can see an exclusive new image from Total Film below.

Few concrete details are known about Malek’s Safin beyond his appearance, including mysterious facial scarring (which was “important to have,” Malek assures Total Film) and the unsettling Japanese Noh mask he’s sporting above.

“We didn’t pick a mask off a wall willy-nilly,” Malek adds. “We had to think extremely specifically as to what would make the most sense. If it doesn’t make sense to the story and to the character, then arguably it loses impact.”

For the film’s director Cary Joji Fukunaga – an American-born filmmaker of Japanese descent – Safin’s Japanese aesthetics stemmed from both his personal tastes, as well as speaking to where Safin came from. “We came up with a mythology about where he’s based, and how there can be a mix of cultural influences there.”

No Time To Die opens on April 2. For more from Malek and Fukunaga, check out the new issue of Total Film magazine, which hits shelves on this February 7. Look out for the Fast & Furious 9 cover as revealed by Vin Diesel himself.