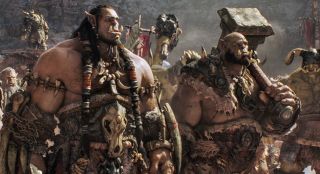 It's been a big week for the Assassin's Creed movie; we've gotten the first images, poster, and trailer for the upcoming video game adaptation, and there's plenty to be optimistic about. We still have a long wait before that film is released, but the good news is that Warcraft - a.k.a. the other video game adaptation of 2016 - is less than a month away from its cinematic debut. Legendary have unveiled four clips and a colourful batch of stills to further whet our appetites, and you can check them out below...

If nothing else Warcraft looks to be one of the prettiest films of 2016, and the snippets of action we've seen in the trailers and clips have been equally impressive (and will doubtless play even better on a big 3D screen). We'll find out what else the film has going for it when it's finally released next month.

Directed by Duncan Jones and starring Travis Fimmel, Paula Patton, Ben Foster, Dominic Cooper, Toby Kebbell, and Ben Schnetzer, Warcraft: The Beginning opens in UK cinemas June 3, 2016 and in the US on June 10, 2016.