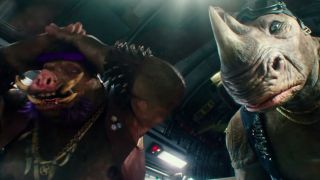 Over the years we've seen many sides to the Teenage Mutant Ninja Turtles, be it an animated TV series, the game adaptations, or those early '90s guilty pleasure movies. Paramount's 2014 reboot of the brand falls into that latter category - it didn't win any Oscars but it made enough of an impression to warrant a sequel. Teenage Mutant Ninja Turtles: Out Of The Shadows is that very movie. And we've now got another trailer to try and lure us into the multiplex when it arrives in June. Check it out, dude:

Not much of the footage is new, as we've already had plenty of trailers pointing out the major beats of the film. The added tidbits include Michelangelo botching Donatello's new addition to the Turtle van, and Bebop and Rocksteady being ridiculed for their hairstyles. The international version goes one better and shows their wagging tails.

If you're a fan of the franchise then you'll have already made up your mind about forking out for a ticket. For me, there's just one question that I'd like answering: will it be as good as Secret of the Ooze?

Directed by Dave Green and starring Megan Fox, Stephen Amell, Will Arnett, William Fichtner, and Tyler Perry, Teenage Mutant Ninja Turtles: Out of the Shadows will be released in UK and US cinemas on June 3, 2016.