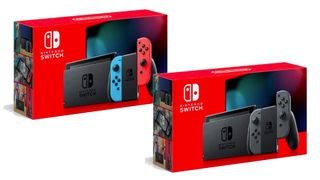 Just a week on from announcing the Nintendo Switch Lite, a smaller, cheaper model of its best selling eighth generation console, the video game company has unexpectedly dropped information about another new variant of the Switch's original hardware.

This new model, unlike the Lite, is designed to be faster and more powerful than the classic Switch, but only with regards to its battery life, which can last between four to nine hours depending on what software you're playing. This is significantly longer than what Switch players are used to, as the console's battery approximately sits between the three and seven hour mark at present.

This is, however, the only distinguishing feature between the original Switch, which is releasing at the end of August (September in the UK) for roughly the same price as its slightly less powerful brethren. Like the PS4 Slim, this will replace the old model of the Nintendo Switch, hence why it has no "Pro" moniker to separate them from each other, though it is possible some small revisions have been made to its CPU and storage system.

This will come as disappointing news to those who had heard the rumours of a Nintendo Switch Pro console with an upgraded screen and a thinner frame, but there's every possibility something of that nature could be releasing next year instead. And even if it doesn't, at least the low Nintendo Switch Lite price means there are now fewer barriers than ever if you were waiting to try out the portable home console.

Alongside this news, Nintendo also announced two more pairs of Joy-Cons - Blue/Neon Yellow and Neon Purple/Neon Orange - which will be releasing later this year, on October 4. You can read more about the new Nintendo Switch model on the company's website here (just make sure you use Google Translate, or can read Japanese).

For more, check out the best Switch games you can buy right now, or watch our Release Radar below for a guide to everything else out this week.