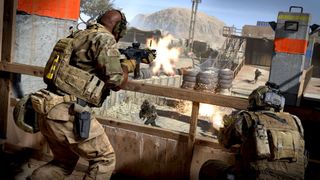 Dataminers have been crawling through the backend of Call of Duty: Modern Warfare once again and this time, they might just have hit the motherlode with details of the shooter's rumoured battle royal mode.

Though developer Infinity Ward has yet to formally announce the new mode, Redditor Senescallo (thanks, VG24/7) has unearthed a treasure trove of secret info, including the names of the zones in the battle royale's map, points of interest, modes, mission types, names of loot and armour, player perks, killstreaks, and all default and additional options, including, it seems, evidence of that rumoured 200-player lobby.

According to the leak, the mode will offer both private and public matches and offer solo, duos, and 4-player squads. By comparison, EA's rival battle royale, Apex Legends, only offers 3-player squad matches, with duo mode only enabled as a limited-time event from time to time.

Players may also be able to obtain respawn tokens for injured teammates, which will give them a chance to return to battle if they successfully down another enemy in a 1v1 match in the Gulag.

For all the details, head on over to Reddit. Of course, leaks are notoriously unreliable and we should always take what we read with a liberal bucket of salt until the facts are confirmed. But this latest information certainly adds credence to the rumours we've seen bubbling for several months now, don't they?

In other Modern Warfare news, speaking in a Quarterly Earnings report last week, Activision stated that the already confirmed Battle Pass content for Modern Warfare - which replaces the franchise's recent flirtation with loot boxes - is launching in December, "slightly later than originally planned".

As Alex reported at the time, Activision has already promised that the upcoming Battle Pass system will "allow players to see the content that they are earning or buying [and] launch timed to new, post-launch live seasons, so you can unlock cool new Modern Warfare-themed content that matches each season".

Check out the best Call of Duty Modern Warfare tips you need to know before jumping in.