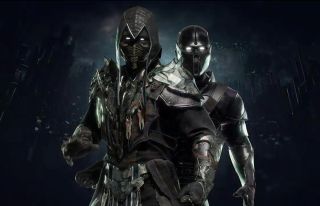 During Mortal Kombat 11’s C2E2 panel in Chicago last night, NetherRealm Studios showcased two new playable fighters who will be joining the fighting roster. A new gameplay trailer unveiled Noob Saibot’s return to the series, and to add even more excitement to the gory fighting fest, Shang Tsung from the Mortal Kombat movie is going to be the first DLC character.

The gameplay trailer shows off Noob Saibot’s suitability gut-wrenching finisher along with some realm-bending special moves. Creator Ed Boon talked about the character’s history in the series, in which he started out as a hidden character in Mortal Kombat 2 and didn’t have much of a backstory at all. Since then they’ve fleshed out the character and truly made him a part of series’ history, with more detailed gear and plenty of awesome moves to play around with.

Read more: Mortal Kombat 11 review: "Newcomers and fans alike will have a lot to love"

Half way through the panel, NetherRealm gave us one more character reveal, and it was none other than Shang Tsung as he appeared in the Mortal Kombat movie that came out back in 1995. Actor Cary-Hiroyuki Tagawa has reprised his role to appear in-game as the first DLC character. Ed Boon explained Shang Tsung will also act as the guide of the Krypt, where players can unlock additional content.

Outside of the two reveals, the panel talked about how they design and create the characters brutal fatalities, with slides show early concept art of Baraka’s fatality Face Off, and how it then progresses in Motion-capture to become what we see in-game.

With Mortal Kombat’s release date - April 23 - just a month away, it won’t be long until we can test out Saibot’s moves for ourselves.