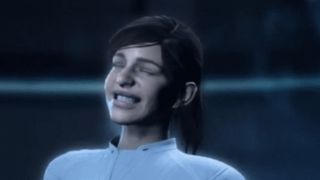 [UPDATED: People are finding more weird animations and glitches which I've added at the bottom.]

Mass Effect Andromeda's animation is under scrutiny again as players get an early go on the game via EA Access. It's... generating some mixed results, with players capturing videos of patchy, uncanny-valley, facial movements and some extremely interesting walking animations. (Although Mass Effect Andromeda reactions overall seem positive).

Animation was one of the things criticised early on when the game was revealed, so much so that Bioware's general manager Aaryn Flynn responded, citing a 'performance bug' the team were going to improve.

Sara Ryder is awesome. Strong, funny, and adventurous. Sorry there's a facial performance bug that lets her down here. We'll improve it https://t.co/esUaI4aFTJJanuary 3, 2017

Have they succeeded? Judge for yourself.

NeoGAF has been rounding up the best (worst) examples, and faces have been getting a lot of flack for their 'interesting' emotional range. (There's a few mild spoilers in a couple of videos if you've been avoiding everything, but nothing that hasn't been revealed officially.)

Hahaha, this is getting better and better. Hobby SFM animators would be shamed for that quality. pic.twitter.com/1qAah27TJOMarch 15, 2017

This video also shows off some of the acting and dialogue which is also getting shredded, fairly or not, by fans. Listen out for the un-ironic uttering of 'my face is tired'.

And it's not just Sara Ryder getting singled out, Scott is having his moments.

As well as the lack of emotion, the way the faces are moving is being questioned, leading this post to compare the cast to Pingu for reasons about to become clear...

The Pingu comparisons don't stop there either: walking is also somewhat creatively tackled in Andromeda, as pointed out by this post's comparison.

In fact the walking generally is getting picked out as much as the facial animation. Here's one more comparison:

However, as far as Mass Effect Andromeda walks go, this obviously glitched animation is the one to beat:

Since publishing this story more examples have turned up:

oh my god dude mass effect andromeda is the gift that keeps on giving pic.twitter.com/any8OqRKlJMarch 17, 2017

Something tells me stuff like this is not what BioWare and EA were hoping people would be focusing on as Mass Effect nears release. pic.twitter.com/sQkEMmI2iuMarch 16, 2017

There's there's this weird face and hair combo, posted simply with the sentence: "Oh god what is going on with my Ryder..."

Then there's this one:

Then we've got sperse mern here.

This raises some questions about how revival actually works. With electricity by the looks of things.

Find out everything we know about Mass Effect Andromeda here, and tune back next week for our full review, when we'll be in a better position to tell you if the wonky animation is just an amusing aside, or symptomatic of the wider experience.