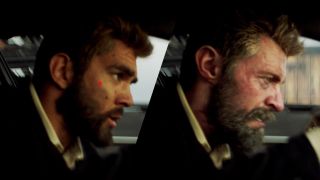 James Mangold’s Logan is one of the best superhero films of the past decade, and one of the reasons for that is because it values character moments far more than convoluted plotting. But despite being largely a character study and keeping the focus on Logan throughout, I did not realize that there were multiple scenes containing convincing digital doubles of the actors instead of the actual Hugh Jackman and newcomer Dafne Keen.

Cartoon Brew interviewed the team at Vancouver’s Image Engine and discovered how they pulled off such a seamless effect. On the set, stunt doubles would wear dots on their faces for motion tracking purposes, and Jackman and Keen were recorded and scanned while making 64 different faces under different lighting conditions so their faces could be grafted on to the other bodies in post-production.

The biggest difference between what we see in Logan and what Lucasfilm did with Grand Moff Tarkin in Rogue One: A Star Wars Story is that Logan’s digital doubles didn’t need to deliver any dialogue. The most challenging aspect of achieving their intended effect was solving problems with the digital characters’ eyes, which is where the audience is most likely to be able to tell if they’re seeing a real person or an effect because of the “uncanny valley” phenomenon. But it’s safe to say they nailed it, because aside from some spoilery moments that I won’t get into here (and you know exactly what I’m talking about if you’ve seen the movie already), there was never a time where I thought I was seeing any CG trickery on screen.