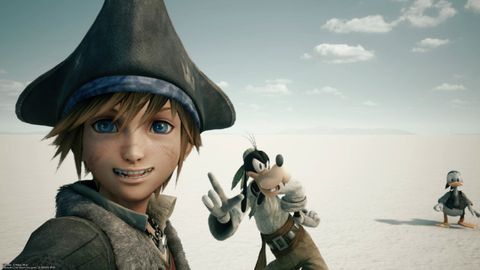 Still madder than a box of frogs, but its magical Disney charms make it worth the long wait

I'm fighting a giant dragon with Frozen's snow golem in the magical kingdom of Arendelle. Do I really know why I'm doing it? Not a clue. Do I care? No. All that matters is that Elsa needs me and I'm hitting things with a massive key that spits out flowers and slaughtering monsters with a teacup made out of fairy lights. It's been 13 years since the last big release for Kingdom Hearts, and now I'm not sure how I lived without its Mickey Mouse shaped madness in my life.

Donald Duck is my BFF now

At its big, squidgy center, Kingdom Hearts 3 is a massive JRPG with multiple menus, stats, weapons, items and buffs, it just happens to be populated by characters from the world of Disney. Not in a cursory, cameo sort of way, you become fully immersed in different Disney worlds, and party is made up of you - heroic twink Sora - Goofy, Donald Duck and a roster of allies like Buzz Lightyear, Mike Wazowski and Hercules. Your wholesome trio travel (by Gummi Ship) between a solar system of different Disney planets like Tangled's Corona and Big Hero 6's San Fransokyo, solving whatever problem the big dark villains have caused there and getting a shiny new keyblade in return.

The keyblade is your main weapon, but combat in Kingdom Hearts 3 is a spectacular of spells, special attacks and summons that make every battle like feel like the 4th of July. Fights are in real time and manic, with numerous forms of "heartless" - blue bad guys - or "nobodies" - white bad guys - as your basic cannon fodder, and what feels like hundreds of ways to deal with them. As well as melee combat, you can cast spells like fire or blizzard, and eventually you'll trigger your keyblade's particular features. The Tangled themed blade, for instance, does mad mirage magic for a time before becoming a tower that damages any close by enemies. There are other special attacks too that you can access while taking down particular foes, all based on Disney Park rides. Donald, Goofy and your other allies have special attacks too, and you can summon other Disney characters like Wreck It Ralph and lion Simba with the Link move. It's a little overwhelming, but no battle, no matter how big - a level ending boss say - or small, is ever boring.

The story of Kingdom Hearts is so complicated, Square Enix will release a special recap on January 29. The Memory Archive will be added to the title menu via an online update. This is a recap of all the events in the Kingdom Hearts story up to the beginning of Kingdom Hearts 3. Find out more about the ending, epilogue, and secret ending here.

The same can't be said for journeys between worlds, aboard your Gummi Ship. To get anywhere new you have to traverse a space filled with enemies, obstacles and the occasional treasure sphere - floating puzzles with goodies in - but it's the blandest part of the game, missing any Disney magic and instead feeling like a slightly dusty arcade game. You can expand your Gummi Ship, adding new blocks, weapons and, um, a giant puppy dog, but I'd happily have traded it all away for a cute three second animation. For a game that's so aggressively fun the rest of the time the space travel felt super lackluster.

Cooking up a treat

One of my favorite parts of the game could fallen foul of the same dull grind. Sora can search the world for ingredients like caviar or butter that can be made into meals to buff your stats. In a stroke of genius though, you're collecting the ingredients for Ratatouille's Remy, and then helping him cook in the kitchen of a bistro owned by Scrooge McDuck. (Imagine my voice getting higher with every word in that sentence.) Think Final Fantasy 15's cuisine obsession, but with just a soupcon of Cooking Mama. It's so delightful, so utterly fanciful and extra, that I would pay money for it as a standalone release. I don't know what the good people at Square Enix did to whoever at Disney that signs the licensing deals, but I hope a) It involved minimal kidnapping of family members and b) they keep doing it forever.

Now, if you're new to the series or have been out of the loop for a while, this might all sound a but much. Forget World of Warcraft or Metal Gear, the Kingdom Hearts series has one of the most impenetrable stories ever committed to pixels. The good news is it barely matters. Would a few more cut scenes make sense if you know the history of Organization 13 or can tell your Xehanort from your Xemnas? Sure, but all you really need to know is anyone that looks shady as hell is, and you're fighting for all that is good and pure in the world. Oh, and Mickey Mouse is a King. Even if you're a fan, and you've done your hours in the PSP game and the Nintendo DS and the remasters, there are times when Kingdom Hearts 3 won't make sense. Then there are times when you get to find bits of Olaf the snowman or hang out with Woody and Buzz, and honestly you couldn't care less why any of it is happening.

6 essential Kingdom Hearts 3 tips to know before you play

The only time the magic failed? The Pirates of the Caribbean world. I'm sure it sort of made sense around the early 2000s, but now - since the deeply average At World's End and all that nasty business with Johnny Depp - watching a Captain Jack Sparrow straight from the Uncanny Valley (and let's not even talk about the wax faced versions of Will Turner or Elizabeth Swann) gurn for Sora has rather lost its charm. To add insult to injury the world is joyless too, and includes an aerial battle with a giant boss bird that was so enraging it nearly made me break Dry January.

Whatever the flaws, there is nothing quite like Kingdom Hearts 3, and it's a wild, wonderful ride as a result. Name one other game where you can watch Elsa belt out Let It Go before hammering some monsters to death with a giant key. I'll wait.

Still madder than a box of frogs, but its magical Disney charms make it worth the long wait